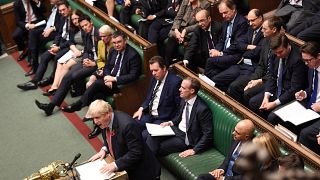 Will Boris Johnson get the majority he needs to get Brexit done?

The UK has taken a major step towards a snap general election - but will Boris Johnson's Conservatives get the majority they need to push through Brexit?

After repeated failures to get an EU divorce deal through parliament, MPs voted on Tuesday (October 30) to go back to the people.

Unless the House of Lords — the UK's upper parliament — objects, the election is set to be held on Thursday, December 12.

“All I would say is that today, at the end of October, we have the Conservatives well ahead [in the polls]," Ben Page, chief executive of polling firm Ipsos Mori, told Euronews. “If you don’t want to look at the headline results at the polls, another predictive factor that has been very reliable for the last 30 or 40 years, is not people’s position in the polls at the start of the campaign but rather who is seen as the best prime minister and the best person to run the economy.”

If the election is confirmed for December, it would be the first time the UK has held a vote in this month since 1923.

There have been fears that the run-up to Christmas and the weather could affect turnout. But Page feels such concerns have been exaggerated.

"I do think there is a lot of folklore about the weather - it is probably less important than it sounds," Page said on Good Morning Europe.

"Remember millions and millions of people will not cast their votes by post so the weather will not affect them too much.

"We all have central heating now which we didn't in the 1920s and the evidence is weather affects it much less than one might imagine."

A more relevant factor concerning whether or not the Conservatives will get the majority is perhaps Nigel Farage's Brexit Party.

Brexiters have urged Farage's movement and the Conservatives to agree on an election pact to avoid them taking votes from each other.

You can watch the full report in the video player, above.