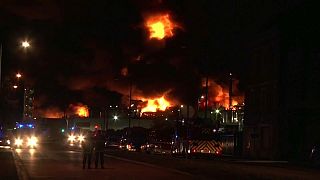 An air quality expert has told Good Morning Europe that reactions between chemicals in the Rouen factory fire could have created carcinogenic particles.

More than 5,000 tonnes of 400 different substances were ignited in the accident at the Lubrizol plant a week ago.

“It’s like a major oil spill in a city of 100,000 people. This list has more than 400 chemicals. But that’s only the start; these chemicals change because of the fire and then combine one with the other which could be very toxic. We’re expecting endocrine disruptors and carcinogenic molecules (to have been created).

The government says "don’t worry there is nothing dangerous", but the government doesn’t know either. This is new and we are still looking for answers on certain specific chemicals and we still don’t have the answers.

We should absolutely worry about eating and absorbing the polluting elements which have been spread all over the region and also up to Brussels and Belgium.

Around 2,000 people demonstrated in Rouen on Tuesday folllowing he release of a list of 500 chemicals involved in the accident including fuel additives, anti-freeze and solvents,

The environment protection association Robin des Bois has also called for factories like Lubrizol to be more closely monitored" and for the prefect to launch an environmental investigation.