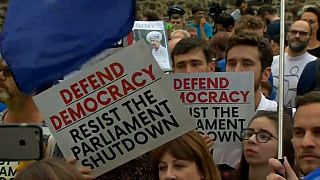 Britons will suffer hardship in ‘No Deal’ Brexit - trade association

A No Deal Brexit will hit UK consumers hard, according to the British Retail Consortium.

The warning came after major demonstrations took place across the UK at the weekend against Boris Johnson's plan to suspend the UK Parliament in the run-up to the Brexit deadline.

The British Government is warning rebel Conservative MPs that they won't be reselected as candidates in any future election if they oppose its Brexit strategy.

The move comes as British MPs from across the political spectrum continue making plans to seize control of the parliamentary process in an attempt to prevent a 'No Deal' outcome.

Michael Gove, the minister in charge of ‘No Deal’ planning, has also refused to confirm that the government would abide by any legislation passed by parliament to prevent leaving without a deal.

William Bain, Brexit Policy Adviser for the British Retail Consortium told Euronews' Good Morning Europe that his members would be hit "very significantly' in a 'No Deal':

"The real hardship though would be faced by consumers, because if you look at the impact in November, it would be on the particular types of foods from EU 27 that appear on store shelves: 70% of tomatoes, 86% of salad leaves, 27% of soft fruits. These are all coming from the EU 27.

"Now there is the problem that if we get delays at the ports and extra controls (imposed), we’re going to get delays and that means goods arriving on shelves in a less good state, affecting choice, availability and quality.

"We’ve been very clear for three years – a deal is the only way we can retrain the efficiency and integrity of these supply chains."

No-deal Brexit: what would ‘WTO terms’ mean for UK-EU trade?

No-deal Brexit: everything you need to know

Brexit Guide: where are we now?