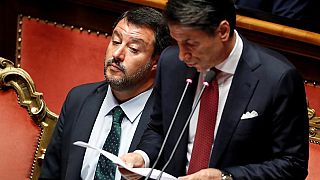 Michele Sodano a Five Star Movement MP for Sicily and Lia Quartapelle Democratic Party deputy for Rome joined Euronews to discus the potential challenges to their parties forming a new coalition in the wake of Giuseppe Conte's resignation.

Conte resigned on Tuesday before facing a no-confidence vote as a fragile coalition between the populist, left-leaning Five Star Movement and the right-wing League party headed by Matteo Salvini.

One of the options touted since then is a possible new coalition between the Democratic Party and Five Star Movement, a move that would forsake the need for new elections amid delicate budget negotiations with the European Union.

Polls indicate that Salvini's League party are set for huge gains in the event of an election.

In his resignation speech, Conte blasted Salvini for "seeking personal interest and party's interest [above the nation's one]."

Yet Salvini was unrepentant, "I would do everything I did again, with the strength of being a free man who is not afraid of the judgement of the Italians."

But potential bedfellows the 5SM and the PD don't appear to be on the same page.

“We don’t want a government just to have a government," said Quartapelle, who added that Democratic Party will only join the coalition if there is a massive change of direction in the government.

Five Star's Sodano says they need to keep on the current track, and finish reforms the government started last year.