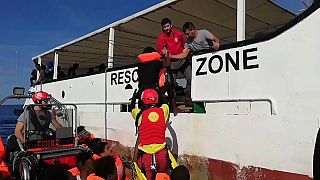 More than 500 migrants remain stranded on ships in the Mediterranean

Two boats carrying more than 500 migrants remain stranded in the Mediterranean after Italy and Malta refused to allow them to dock.

Open Arms, the Spanish NGO operating one of the vessels, said they felt "abandoned" and criticised Europe's alleged silence on the matter.

It is now 12 days that the boat has been stranded with around 150 migrants onboard near the Italian island of Lampedusa.

Another boat, "Ocean Viking", operated by Doctors Without Borders (MSF) and SOS Méditerranée, is stranded off the coast of Libya with around 356 migrants.

France's president, Emmanuel Macron, has said migrants shouldn't have to choose between "being bombed in Libya or drowning in the Mediterranean".

Macron has suggested, along with Germany, a "solidarity mechanism" that would see rescued migrants shared out across the European Union.

More than a dozen EU states agreed to the idea at a meeting of EU foreign affairs and interior ministers last month.

Italy's interior minister, Matteo Salvini, whose country has been at the forefront of Europe's migrant arrivals, did not take part in the meeting.

In a letter to his French counterpart Christophe Castaner, Salvini warned of the effect of decisions “solely taken in Paris and Berlin”.

Italy took in almost all of the migrants rescued by humanitarian groups at sea until a populist coalition government took office in 2018 and immediately sought to close the nation’s ports to the charity vessels.

Referring to the two migrants boats currently stranded in the Mediterranean, Dimitris Avramopoulos, EU Commissioner for Migration, said: “Temporary arrangements that provide for safe and predictable solutions for the persons rescued at sea are urgently needed in the Mediterranean. We stand ready to support member states, including operationally and financially.”

Watch the full report on the stranded migrant ships in Good Morning Europe's report in the video player, above.