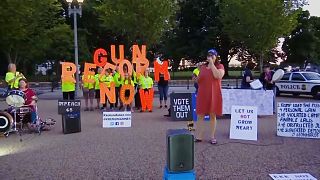 Activist group calls for impeachment during a vigil for El Paso

Saturday (August 10) night saw duelling messages outside White House as the activist group Kremlin Annex called for gun reform and impeachment while members of the El Paso community in Washington held a candlelight vigil to honour the fallen after a mass shooting a week ago.

The gunman in El Paso, identified by authorities as 21-year-old Patrick Crusius, killed 22 people, most of them Hispanic, when he opened fire at a Walmart store on August 3. He confessed while surrendering and told police he was targeting "Mexicans," according to an El Paso police affidavit.

Before the rampage, the suspect posted a manifesto online that was rife with anti-immigrant hatred, law enforcement agencies said.

Trump on Wednesday said on Twitter: "The Dems new weapon is actually their old weapon, one which they never cease to use when they are down, or run out of facts, RACISM!"