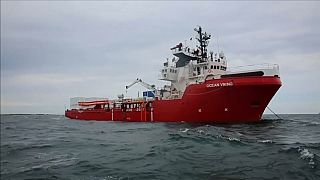 Two charities dedicated to rescuing migrants in the Mediterranean are to resume operations seven months after they were forced to stop using their ship, Aquarius.

The ship is making its way to the Mediterranean, where it will begin operating with a crew of 31 people, including 13 search and rescue team members from SOS Mediterranee, nine MSF staff and nine marine crew members.

“EU states have continued a harsh campaign of criminalising rescue ships and most importantly, there is still no coordinated, sustainable and shared mechanism of disembarkation in accordance with maritime law.

Sophie Beau, co-founder of SOS Mediterranee said the organisations had been forced to step in:

"The long-lasting inaction of EU member states to create a sustainable, shared and predictable search and rescue mechanism in the central Mediterranean leaves us as the civil society to go back at sea and save lives.

“Three years ago, when we started our operations with the Aquarius, we would have never imagined saving almost 30,000 lives at sea.

“That is why - now more than ever - we are calling on European citizens to support our new civil rescue ship which has a cost of 14, 000 euros per day and allow this ship to fulfil its lifesaving mission”.

426 people are known to have died in the central Mediterranean since SOS Mediterranee and MSF ended their operations with the Aquarius on December 2018, according to a joint statement.

“People are dying as we speak, we do not accept this. This is the reason we are sending our new rescue ship back to the Mediterranean Sea.

“We will call upon the responsible states to find a safe port. We are well-prepared and acting in accordance with international maritime law.

“We need a political solution; we need a reliable mechanism from the EU to bring the people into save harbour.”