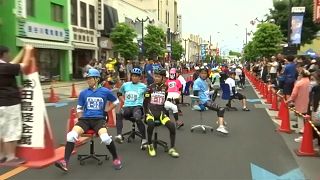 Office chairs make for unusual Formula One in Japan

The small city of Hanyu, 60 kilometres north of Tokyo, was the headquarters of the Grand Prize of the Japanese office 'Isu'. The initiative was created ten years ago by Tsuyoshi Tahara in Kyoto and became so popular that this year 55 teams attended.

The teams were composed of three people, taking turns for at least two hours on a 200 metre course.

The prize is a bag with 90 kilograms of local rice, which the "drivers" made an effort to collect. The next Isu Grand Prix will take place next month in Iwate.