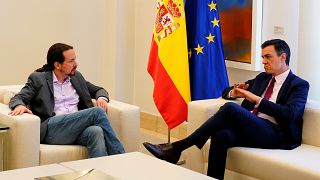 Spain's acting Prime Minister Pedro Sanchez has met with opposition leaders, opening the door to forming a coalition government. Sanchez's centre-left party took the most votes in April's national election, but fell short of the numbers it needed to form government on its own.

Sanchez has indicated he'd prefer to move forward without a coalition partner, but fellow leftist leader, Podemos head Pablo Iglesias, has warned that would leave them vulnerable in the face of a surging right wing. Sanchez already met with right-wing People's Party leader Pablo Casado and Citizens leader Albert Rivera, but both said they would not work with the Socialists. Pablo Iglesias said just the opposite.

“This first meeting was successful, I am optimistic in relation to how things are going to be done but now we have to be prudent, discrete and calm," he told the media after Tuesday's meeting with Sanchez.

"From this initial point in which we agree to be agreed, in which we understand progressive parties have to be united for dealing with Spanish future... I think this is the best starting point for the work that is going to be developed the next weeks.”

But journalist Jaime Velasquez told Good Morning Europe on Wednesday that Sanchez looked like he was more than prepared to go it alone.

"Sanchez knows now that he is without a doubt going to be the next Prime Minister, Casado and Rivera have offered Sanchez some dialogue and agreements on key issues such as Catalonia, migration and terrorism, and Pablo Iglesias after a meeting of two hours and a half didn't manage to get a confirmation from Pedro Sanchez that he will try a coalition government," said Velasquez.

"Why? Well, Pedro Sanchez needs more than Podemos if he wants a stable term in office, and he will probably have to negotiate left and right if wants to pass a budget without the support of the Catalan parties. So I would say that Sanchez is ready for a minority government- but it's not going to be easy, this task for him during the next four years."

Meanwhile, the Vox party saw the best election result for the far-right in Spain since the Franco dictatorship. They earned 24 seats in Parliament, with about 10 per cent of the votes. Leader Santiago Abascal celebrated the election results last week.

But though their numbers can be seen as a success compared to the past, their true influence in Parliament may be small.

"The fact that Pedro Sanchez didn't call Vox for this round of contacts tells a lot about the real force of Vox in Parliament," said Velasquez.

"Surely they are going to make a lot of noise, but there's little they can do with 24 seats, especially if a government from Pedro Sanchez finally happens. I think that they're going to try to grow and breed in the midst of the instability of a minority government."