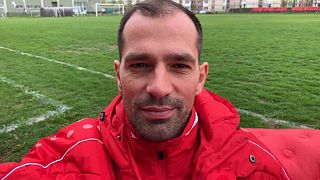 Our correspondents Damon Embling and Gabor Tanacs continue our road trip across Europe, arriving in Székely land in Romania. Székely land is a place that feels more like Hungary than Romania as around 80 percent of the community have Hungarian ancestry.

Hungarians in the area are pushing for greater autonomy from Romania. They want a greater say in the cultural and economic independence of their region. Csikszereda football club is partly funded by Hungary - in a community which looks to both to Budapest and Bucharest. These Hungarians play for a team based out of the town of Miercurea Ciuc.

Zoltán Dusinszki is the Technical Director for the team’s football academy. He says that ‘more than 50 kids play football at his club in Csikszereda (Hungarian name for the city of Miercurea Ciuc). This is a community building up force in Csikszereda and all of Transylvania."

Barna Bajkó is the team captain at Csikszereda FC and he thinks both peoples living alongside each other is not a problem: ‘I have Hungarian friends who live in Romanian parts, but also Romanian friends, neighbours, childhood friends, with whom I have grown up. To tell the truth, there are people who differentiate the two, but this is not a problem for me, I learned to live with that."

Attila Csürös is a footballer with the Csikszereda club: ‘Well, the situation is that it is slightly more difficult for Hungarians, because we are living in a minority in this country, and all the Romanian teams want to perform better against the Hungarians, they want to score a better result.’

Some would like the local people to have more independence, regardless of their ethnic background. Others think if autonomy was granted, Hungarians could live a better life. Some claim Romanians ‘do not understand what autonomy is.’

Even though some sort of regional, economic or cultural autonomy are the wishes of many in the region, it might be a long way off as the main Romanian political parties do not support it.

Watch the full report from Damon Embling and Gabor Tanacs in Transylvania in the player above.