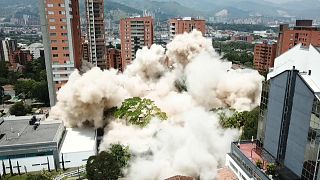 A former Medellin home of drug lord Pablo Escobar has been destroyed in Colombia following concern that the site was becoming a tourist destination.

Escobar was killed in December 1993 in a joint Colombia-U.S. operation.

The building will be replaced by a memorial to the victims of drug violence.