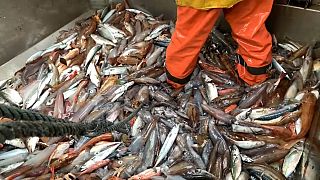 At 5 o’clock in the morning in the northern French city of Boulogne-Sur-Mer, the fishing trawler Marmouset III navigates out of the harbour and heads for another expedition.

32 year-old Pierre Leprêtre is the boss on-board. His family has been sailing the waters of the Channel for five generations - he knows exactly where to haul out a good catch.

“This time we are going after squid. It’s the species of the moment. There will surely be some whiting, a bit of mackerel, some tub gurnard. For the moment we will stay in French waters, but it’s very possible that we will be in British waters at the end of the day. It’s really nearby,” Leprêtre, co-owner of the Marmouset III, said.

Under EU rules, all European vessels are free to throw their nets wherever they want, given certain limits and quotas.

The UK, with its long coastline and bountiful waters, is a prime fishing destination for foreign ships. This boat needs to sail for only 30 minutes to reach British waters, where it spends three quarters of its time.

The crew members get ready for the first manoeuvre of the day. It is called the “Danish seine”. The ropes form a circle several miles wide and then progressively close in on the fish.

The fishermen eagerly await the result: their pay depends on how much they catch.

“This is the charm of this job, we never know what we are going to get. It’s not like in a factory. One time there is a lot of fish, another time there is nothing,” one of the fishermen Emmanuel Descharles said.

As the net opens and drops hundreds of kilos of fish, the crew rejoices. But, there is no time to celebrate and a lot of work still needs to be done.

Once aboard the ship, the fish are carefully sorted according to species and size. In the ship’s hold, the fish is then weighed, labelled, iced and stored. The whole process is repeated several times a day.

It’s gruelling work and the crew hardly gets time to rest.

But lately, these fishermen feel a sense of urgency, as one issue developing across the Channel puts their livelihoods on the line: Brexit.

In case of a no-deal, they will be barred from accessing British waters in just a few weeks.

“If it happens, it will be the death of this job for the French. Because if we can’t fish in British waters anymore, it’s not worth it,” one of the fishermen, Emmanuel Pauchet said.

His fear is shared by Pierre. With his business partners, they invested 2.7 million euros for the construction of this new boat. Yet, Pierre says he understands why 9 out of 10 British fishermen voted leave in the 2016 referendum.

“European regulation is more and more strict, more and more absurd. Because these regulations don’t make any sense. We are sick and tired of it. The British were fed up, but here in France we are as well,” Leprêtre remarked.

Despite their worries, these fishermen haven’t lost hope. On the one hand, if the Brexit deal does go through, it will guarantee access to British waters during the transition period and allow enough time for a new fishing agreement.

On the other hand, in the event of a disorderly Brexit, they are confident that the British fishing industry will want to negotiate with other countries.

“Their production is not consumed only by the English, so they are obliged to export. And to export, they need Europe. They can’t keep it all for themselves,” Leprêtre added.

As night begins to fall, the weather gets worse and the catch more difficult. The ship decides to head back to Boulogne-sur-Mer, where the fish will be auctioned to the highest bidder.

This is France’s main fishing port. 800 fishermen are based here, and thousands more workers are employed by the industry.

Their fates, more than ever, are tied to the politics of Westminster.