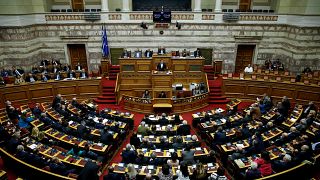 The Greek parliament approved the country’s first budget since exiting the bailout programmes in August.

Prime Minister Alexis Tsipras argued that after eight years of austerity, this is the budget of a free Greece.

“By the end of 2018 the country will have completed two years of positive growth rate, 1.5% last year and more than 2% this year.” Tsipras said, “We expect it even bigger next year.”

Leader of the main opposition party Kyriakos Mitsotakis accused the government of making life worse for Greeks, especially those in need.

"What remains is the enhanced surveillance every three months. No other country in programme has that.” Mitsotakis said ”And unfortunately, unbearable commitments for primary surpluses. This is the unofficial 4th bailout programme that we talk about."

During the vote, trade unions demonstrated outside the parliament building - for them, austerity has not ended.

“Even though there are some positive measures in the budget for 2019 and the further reductions in pension payments are not included, trade unions are not happy,” Euronews correspondent Nikoleta Drougka said. ”They say that taxes are still a huge burden for workers. They ask for bigger salaries and more public spending in health and education.”