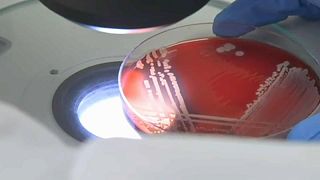 Antibiotic resistant superbugs on the rise

The antibiotic apocalypse— That's the name for a world in which antibiotics can no longer defeat common infections, according to medical experts. A world where a minor illness like strep throat could again be fatal.

Antibiotic resistant infections mean that the bacteria causing the infection has evolved to be resistant to the antibiotics we use due to repeated exposure— and once our strongest antibiotics have created resistant bacteria, there will be no way left to cure the patient.

A new OECD report is predicting a rise in deaths linked to the problem.

The report highlights Greece and Italy as the two OECD countries that would suffer the most from this, due to the high number of people in those countries who treat themselves and their children for the common cold with antibiotics.

It predicts that between 2015 and 2050, 69 thousand 774 people will die because of antibiotic resistant infections— That's 15 deaths per 100 thousand people each year.

But 1200 lives could be saved saved per year just with small efforts to limit the use of antibiotics and encouraging handwashing.

Salman Rushdie: author 'on the road to recovery' after stabbing