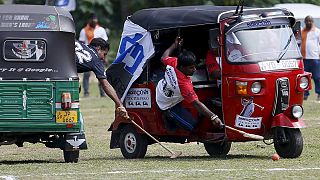 First there was Horse Polo, then Bike Polo and in more recent times Elephant and Segway polo. But now a new form of polo has emerged – Tuk Tuk Polo. This weekend, the second ever Tuk Tuk Polo championships were held in Galle, Sri Lanka. The Tuk Tuk is a motorised, three-wheeled vehicle also known as an auto rickshaw. It has been the symbol of Asia for more than 50 years. It is a very popular way of transporting people around crowded cities and for many tourists it is an enduring symbol of Sri Lanka.