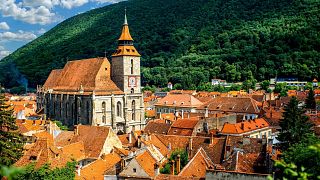 Europe is hardly a stranger to holidaymakers, in fact tourism makes up around 10 per cent of the EU's GDP. And countries such as France, Spain and Italy frequently top the world’s most popular destination lists.

However, there's much more to Europe than just the big names. With incredible sights, sounds and scenery to be explored and with a fraction of the crowds (and the price tag!) it's definitely worth reconsidering your itinerary.

From charming cities, to ancient forests and uncharted mountain ranges, here are eight underrated locations you should consider visiting on your next trip.

Romania: For that fairy tale feeling

Most famous for its association with Bram Stoker’s Dracula, Romania is a land of jagged mountain peaks, storybook castles with soaring spires, and medieval towns that seem unchanged by time.

With fascinating folk museums and rustic villages showcasing the country’s traditional culture, plus walking trails for discovering its natural wetlands and wildlife, there’s plenty to hold your interest here.

If you fancy a visit to a city, Bucharest has a unique architectural style blending classical 19th Parisian buildings with looming soviet style architecture.

This petite sliver of a country sits nestled in the mountains between Switzerland and Austria.

Being so small it has no airport of its own, but access via road or rail from surrounding countries is a breeze. Despite this, it's Europe's least visited country.

Once you make it in, there are plenty of spots for skiing without the usual tourist crowds, as well as hiking and biking trails to explore.

Nestled between Italy, Austria, Hungary and Croatia, Slovenia is an undiscovered dream for outdoorsy types.

From skiing on snow-capped peaks in the Julian Alps and hiking through untouched forests, to exploring the magical subterranean caverns of the vast Postojna Cave, the opportunities for adventure are endless.

Plus with glittering lakes, majestic waterfalls and flowing turquoise rivers to admire, the views are unforgettable. Do try the Bled Cake at Lake Bled too.

With far fewer tourists than neighbouring Norway and Sweden, Finland offers the perfect chance to lose yourself in the towering forests and crystal-clear lakes of the country’s idyllic national parks.

Add a dash of wildlife such as brown bears and elk roaming free; then chuck in the Midnight Sun and Aurora Borealis (Northern Lights) lighting up the sky, and you won’t know where to look!

Located on the shores of the Adriatic Sea, Montenegro is a warm and welcoming country where sheer cliffs and forested mountains carpeted with flowers loom over pretty beaches and sparkling azure waters.

The orange-roofed houses that hug the coastline complete this picture-perfect scene, and there’s always the option to head inland to really escape the crowds.

The Faroe Islands: For a break from society

To really get off the beaten track and into unexplored territory, the Faroe Islands, far out in the North Atlantic Ocean are perfect.

Comprised of 18 different islands, it’s impossible not to fall in love with the archipelago’s plunging cliffs, adorable puffins, crashing waves and stark moorlands. Just be sure to dress for the weather, which can be both unpredictable and changeable.

Estonia: For a chilled getaway

With a population of just 1.3 million, Estonia is one of the least densely populated countries in Europe and has also flown under the radar when it comes to mass tourism.

Its capital Tallinn is an alluring mix of medieval streets, modern business districts and seaside promenades, while the rest of the country is roughly 50 per cent forest, making it easy to escape the hustle and bustle and find some solitude.

Luxembourg: For a unique cityscape

Tiny landlocked Luxembourg is often overlooked in favour of its more famous neighbours France and Germany, but its fairy tale capital, medieval castles and picturesque villages make it well worth a visit.

Despite its small size there’s plenty of nature to explore, with well-maintained bike tracks and hiking trails criss-crossing the forested hills and vineyard-lined valleys.