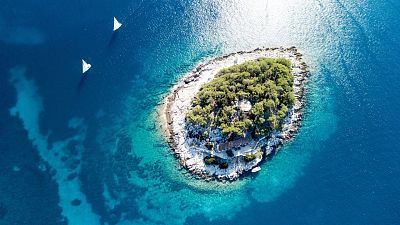 Renowned for its beautiful beaches and with over 1,000 islands to its name, Croatia is a leading destination for nautical tourism.

Home to the largest boat charter fleet in the world, this diverse country sits at the crossroads of central and southeast Europe on the Adriatic Sea.

Don't worry if you get seasick though, there's something for everyone in this Balkan country.

How do I get to the Peljesac peninsula?

While Dubrovnik’s cobbled streets are packed with Game of Thrones fans (the city was a key location in the series), just an hour away you can discover Croatia's quiet side.

The 65 km long Peljesac peninsula, is the second-largest in Croatia. Located just 87km north of Dubrovnik and 144km south of Split, it's a popular destination for long weekends.

The peninsula will soon be linked with the rest of the country by the Peljesac bridge, which is "big news" for anyone wanting to explore the wider Dubrovnik-Neretva County, says Director of Croatia National Tourist Board, Kristjan Stanicic.

When the first vehicles cross the Peljesac bridge in spring 2022, travellers will no longer have to waste time crossing the border at Bosnia and Herzegovina's short coastal strip, Neum, in order to get there.

What can I do in Ston?

Arriving via the Adriatic coast road from Dubrovnik, the first thing that will catch your eye is the 5.5km long defensive walls. These run along the steep slopes that join Ston and Mali Ston, two fortified medieval towns on the isthmus (a thin strip of land).

The Ston Wall, built in 1333, is thought to be the longest preserved medieval stone fortification system in Europe, and one of the longest such walls in the world.

It's also the location of the Ston Wall marathon held every September. Well worth a visit are Ston's "white gold" salt works, the oldest salt harvesting site in the Mediterranean. Foodies meanwhile, can enjoy Ston's famous mussels and oysters, fresh from the beds in the Mali Ston Bay.

Where can I try Croatian wine?

The peninsula is also Croatia’s most famous wine region. The colourful little harbour of Trstenik is home to Grgić Vina, the winery established in 1996 by legendary Napa Valley winemaker, Croatian-born Miljenko “Mike” Grgich.

Mike made his name with a winning Chardonnay at the 1976 legendary Paris Tasting, the first great triumph of Californian wines in Europe. In 1958 Mike noticed the resemblance between the Napa Valley Zinfandel grape and Croatia's native Plavac Mali.

35 years later he grew Plavac Mali (meaning “little blue” in Croatian) in a small, steep area of vineyards on the south-facing slopes of the peninsula, perched above the Adriatic Sea.

The Neretva region is the biggest agricultural region in Croatia and is known as the homeland of mandarines. Located between the land and the sea, "this part of Croatia is the connection between green and blue" explains Kristjan Stanicic.

While long associated with French gastronomy, several Neretva Delta restaurants specialise in serving frogs from the surrounding swamps and rivers. One special dish is frog and eel brudet, a rich, chunky stew seasoned with bay leaves and hot peppers.

The mouth of the Neretva river is also a mecca for kitesurfing. This is due to its shallow sea, beautiful beaches and very steady and reliable thermal wind in the summer months.

Where can I sail in Croatia?

To "truly experience Croatia, you can try sailing along the Adriatic and stopping at many of its coastal cities and docking at a few islands en route," suggests Kristjan Stanicic.

"It's the best way to experience Croatia from Spring through Autumn – cities such as Dubrovnik, Split, Zadar and Rijeka are great starting points". If you're a land-lover though, you can hire a car and explore regions such as Istria and Dalmatia.

What are the best places to eat in Croatia?

Croatia has 78 restaurants in the Michelin guide, ten of which are Michelin starred; "a big number for a small country," says Stanicic.

"In the Istrian Peninsula you can find truffles and "the best olive oils in the world as well as excellent white wines, mostly Malvazija," he adds.

For red wines, head to Dalmatia for indigenous grapes such as Plavac Mali. As well as fine dining, you can also find popular budget restaurants providing traditional regional food. "We call them Konoba (tavern). This includes seafood if you're near the sea, or if you're in continental parts, this means meats".

Where to go for a short break in Croatia

Zagreb or any of the other coastal cities are worth a visit for a different Christmas experience, suggests Stanicic.

While Dubrovnik is always top of the list for most visitors, Split has grown in popularity, as well as the Dalmatian islands of Hvar, Brač, Vis and Korčula among others.

For something new, try Zadar, Pula and Rijeka and Zagreb.

Where can I see animals in Croatia?

Croatia has eight National Parks and 12 Nature Parks for nature lovers to explore.

In central Croatia lies Plitvice Lakes National Park, which is UNESCO recognised. Set in a forest reserve, it consists of a chain of 16 terraced lakes, joined by waterfalls that extend into a limestone canyon.

The Nature Park Kopački Rit, a UNESCO GeoPark, and Nature Park Papuk are home to some of the best examples of Croatia's ancient flora.

The Gorski Kotar and Lika regions meanwhile, are some of the best places to see the Croatian bear, wolf, lynx and otter in their natural habitats.

Croatia is also home to some of the rarest bird species in the world, such as the griffon vulture, golden eagle and long-eared owl. Many shorebirds and migratory birds stop in Croatia on their way to Africa.

Visiting the protected swamplands in Nin, Nijemci or the Nature park Vrana offers a unique opportunity to see the birds in their natural habitat.

What is the best time of year to visit Croatia?

Croatia is best known as a sun and sea destination, but visiting in April and October, means you can enjoy the most popular destinations, such as Dubrovnik, with fewer crowds.

Croatia’s capital and other cities like Split can be visited year-round, and from there you can explore other parts of the country by car, even in winter.

Where to stay in Croatia

Or if you're looking for sustainable luxury, try Villa Nai 3.3 on the island of Dugi Otok (Long Island).

Families should explore the new Aquapark Shhhuma, located in the Nature Park Papuk.

What are the travel restrictions for Croatia

Croatia's current guidelines can be found on the Croatia National Tourist Board website. There is a national safety label and campaign, "Safe stay in Croatia" which was rolled out this Spring.

Croatia counting down to join the Eurozone from 1st January 2023