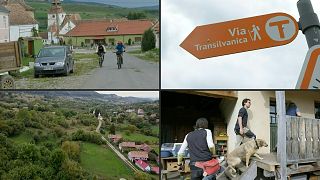 We’ve all heard of El Camino de Santiago in Spain, one of the world’s most famous historical pilgrimage routes.

But if you’re looking for your next challenge and fancy something a little different, why not consider Romania’s new Via Transilvanica instead?

The 1,400 km route - inspired by Spain’s Camino - crosses Romania from North to South, winding through 108 villages and towns along the way.

What is the Via Transilvanica?

The idea for the new long distance trekking route was first dreamed up four years ago by 52-year-old Alin Useriu as a way to explore the wilds of his country.

He wanted to create something similar to the ancient pilgrim route to Santiago or the vast American Pacific Crest Trail.

"My only goal was to revitalise rural areas, and all the friends I talked to were thrilled about the project," he explains.

Little did he know, more than 10,000 people would help turn that dream into reality. They volunteered to mark out the route through the Carpathians and some of the most spectacular landscape on the continent.

Four years later, this mammoth task is finally done. To celebrate its opening, Alin trekked the route himself, spending around 2 months walking from Putna in the northern part of Romania to the Via Transilvanica’s final stop in Drobeta-Turnu Severin near the Serbian border.

If you don’t fancy walking that far or haven’t got two months to spare, the route is split up into seven key regions, each with a unique cuisine and culture.

Each region takes between 6 and 15 days to walk for a more bite size expedition - or you could jump on a bike and cover the distance much quicker.

According to one cyclist on the route, the whole trail could be done in 20 days if you don’t make too many stops.

Despite strong economic growth, Romania has seen an exodus of young people from rural areas. Some of the country's most beautiful regions have suffered the heaviest depopulation.

In one of the 108 villages crossed by the route, Sapartoc, Radu Moldovan has transformed a deserted old home into a pretty guesthouse.

"We wanted to put into practice all the beautiful theories we had learned at university and be a living example," says the farmer who trained in environmental issues and rural development.

"I could not have dreamed of better for Sapartoc," he adds, explaining that the opening of the Via Transilvanica couldn’t have come at a better time. Radu hopes that as the popularity of the Via grows, it will help boost his tiny village which has a population of just twenty two people.

The eco-tourism the trail hopes to encourage is also about preserving local architecture and traditions. Not that Useriu sees much danger of mass tourism of the kind seen on Romania's Black Sea beaches.

But already Useriu's dream of the trail helping to revitalise mountain villages seems to be bearing fruit.

Watch the video above to learn more about the Via Transilvanica.