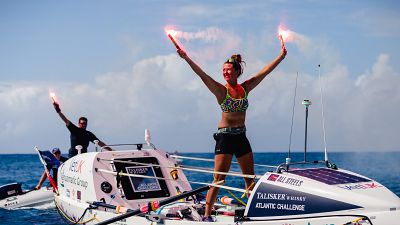 It was during her travels around the world that Jasmine Harrison decided she needed to set herself a goal. She wanted a new challenge to propel her life forwards and put her where she wanted to be.

Aged just 21, Jasmine rowed across the Atlantic Ocean and broke a world record to become the youngest woman ever to solo row across any ocean in the world.

I wanted to challenge myself so then in the future, whenever you come across any life challenges, I can say well if I rowed an ocean, I can get over this.

Why did Jasmine set herself such a huge challenge?

Unlike many of her peers, Jasmine - from Thirsk, North Yorkshire - opted out of going to university when she finished school. Instead, she chose to spend her time teaching swimming and working in a pub to fund her dream of travelling across the world.

It was during her travels that she happened to cross paths with the finish line of the Talisker Whisky Atlantic Challenge, in Antigua. That’s where the seed was planted.

“I'd gone off on a bit of an adventure and I thought that's what I wanted,” Jasmine tells Euronews Travel.

“Something just wasn't sitting right, I was like ‘there's something else that I need to do’ and this row was just in the back of my mind. It was just sat right there [in my head] that I've got to do it.”

How do you prepare to row an entire ocean?

Before you think, ‘I couldn’t possibly do a challenge like this because I can’t row’ - well neither could Jasmine!

She explains that she had always been a keen swimmer and had tried her hand at some sailing, but rowing - even on a river - was a sport she had never considered before.

The first time she rowed was in December 2019, just a year before she was due to set off on her challenge.

“I figured out I couldn't row at all….that was the first time I'd been on a boat and it was awful,” Jasmine tells Euronews.

From January 2020 she began preparing her mind and body for the rowing expedition but didn’t actually set foot back on a boat until Summer 2020 when she got her boat: Argo.

The Talisker Whisky Atlantic challenge is 5,393 kilometres (2,912 nautical miles), starting from La Gomera in the Canary Islands to Antigua in the Caribbean.

It wasn’t all plain sailing (or should we say rowing), though, as Jasmine faced a few bumps along the way.

She capsized twice, losing some of the equipment that was on deck. The second time, her boat flipped a full 360°.

“Everything turns a mess because your whole world is spun over,” says Jasmine.

“It happened two days before I finished, and so by that point, I knew that I was about to hit land and so I'd become quite careless, just in putting things away, putting rubbish in the bin, tidying up, my whole cabin was an absolute state.”

Another scary moment came when Jasmine’s tiny 21ft long ocean rowing boat was almost run down by a large drilling ship in the middle of the night.

“I think the entire thing was scary to be fair, you're away from land, there's no help, you're just there,” explains Jasmine.

The race across the Atlantic isn’t always done alone. Many competitors choose to do it in teams of two or four.

Jasmine tackled the challenge on her own as she just didn’t think she knew anyone else that would want to do it too.

“If you feel like you need somebody to do something, you'd just be waiting forever,” says Jasmine.

“And so I just went alone.”

Despite spending 70 days rowing an ocean by herself, Jasmine says she never felt lonely.

“Spending so much time by yourself... it's what you need to do and quite a lot of people sort don't realise that's what you want, just some space, just go off and to have that, [...] it's really important,” Jasmine explains.

Watch the video above to see Jasmine’s record breaking adventure.