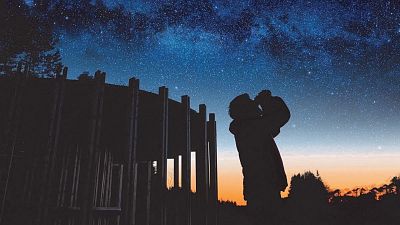 Brits holidaying at home this year could base their break around starry skies rather than sunseeking, after a recent star count revealed less light pollution during lockdown.

Meanwhile, the number of European dark sky parks and reserves is growing, with Naturpark Attersee-Traunsee in Austria the latest addition to around 140 places certified by the International Dark Sky Association.

Of the 18 Dark Sky Reserves worldwide, 13 are in Europe - in the UK, France, Germany and Ireland.

It all adds up to more people rediscovering a love of night skies and stargazing, while staying at home, and it’s something I wanted to experience myself.

Countryside charity CPRE is hoping that darker skies are here to stay, after 7,000 citizen astronomers took part in its biggest ever star count in February.

The results released recently showed that half of those taking part said that they could see 10 or fewer stars. Over the same week last year, 61 per cent of people counted 10 or fewer, with CPRE crediting the improvement to a dramatic drop in severe light pollution, thanks to quieter urban areas and fewer large buildings in operation during lockdown.

Even those in built-up areas are seeing the benefit.

“Data collected during citizen science project Star Count 2021 showed a 10 per cent increase in people reporting darker skies compared to 2020. It is possible that this is related to lockdowns, where businesses have been closed or running reduced hours, so less lighting has leaked into our skies,” says Dr Samantha Rolfe, astronomer at the University of Hertfordshire.

The dramatic drop in severe light pollution is thanks to quieter urban areas and fewer large buildings in operation during lockdown.

"There has also been a nationwide replacement of the old sodium street lighting, which leaked a lot of light,” she adds. “As this goes on, we will see less and less of the typical orange glow in the night sky as the LED bulbs are white and largely direct the light downwards.”

For those at the University of Hertfordshire Observatory, it means student observations are less affected by stray light from the reduced light pollution, giving them better results for their studies, Rolfe explains. And it’s the same for public events - visitors will be able to see more stars than they would have previously.

Heading for the hills

The timeless magic of starlit skies is something I saw myself when my family and I visited the Brecon Beacons, one of Wales' two Dark Sky Reserves, in September.

Staying in a landpod at the youth hostel at the foot of majestic Pen y Fan, we gazed in awe at the heavens, immersed in the pitch black, with only the starlight, a babbling brook and one another for company. The join-the-dots pattern of the night sky created a connection between the five of us firmly rooted on the ground.

It's a moment we're keen to capture again with our holiday this year. It seems finding dark skies goes hand in hand with social distancing, as the smaller the human population, the less likelihood of light pollution.

That's why we're heading off to Hadrian's Wall next month, staying at Ninebanks YHA just below Northumberland National Park, which bills itself as the largest Dark Sky Park in the UK.

Night-time economy with a difference

And we're not the only ones intent on making the most of the lack of light pollution and people during the pandemic.

“It has been fantastic to see more people taking an interest and connecting more with nature, including a particular interest for stargazing. Stargazing has grown within the Northumberland International Dark Sky Park, with astronomy tourism bringing in £25million to the visitor economy. It also supports around 450 jobs,” Duncan Wise, the park's visitor development and tourism officer, tells me.

“Local astronomical societies and those in the astronomy community have noticed people have turned to backyard stargazing and are taking it upon themselves to learn more about our dark skies.”

The team at Northumberland National Park count themselves extremely lucky, and proud, to be home to the darkest skies in England, because of the very low levels of light pollution.

This makes the park one of the best places in the country to go stargazing.

There are so many ways people can enjoy the night sky without spending lots of money on expensive equipment, which is why stargazing can be for anyone and everyone. “It’s something we can all do, even from our back gardens," says Wise.

According to Wise, before investing in any equipment, amateur astronomers should contact their local astronomy society for advice.

After getting away from artificial lights and any other forms of light pollution, allow your eyes to adapt to the darkness, which for adults can take around 15 to 20 minutes. A torch with a red light will allow you to find your way around without destroying your dark-adapted vision, as a white light would.

Free astronomy apps which include a red light setting can help you navigate the night sky without impacting your night vision when looking at the content on your screen.

Allow your eyes to adapt to the darkness, which for adults can take around 15 to 20 minutes.

Wrap up warm and think about taking gloves, a hot water bottle and thermal flask with you. Clear nights, good for stargazing, also tend to be cold.

Be considerate and courteous to nearby residents and wildlife by being aware of noise levels and litter.

“There is so much to experience at night, and a real sense of immersing yourself into nature. It’s the perfect opportunity to discover nocturnal wildlife such as owls, foxes and bats. Therefore it’s important to protect the dark from light pollution," concludes Wise.

We can all play a part in minimising the light pollution we create.

If you’re installing outdoor lighting, use the minimum amount that’s needed and ensure lights are shielded or downward facing.

When picking out new light bulbs, aim for warm white LEDs with a maximum of 3,000K.

It seems the deeper the dark and the brighter the starlight, the more they illuminate the need for less invasive night light in all our lives.

This VR experience imagines a future without vital pollinators

What are dugongs? Why these ‘sea cows’ need protecting from extinction