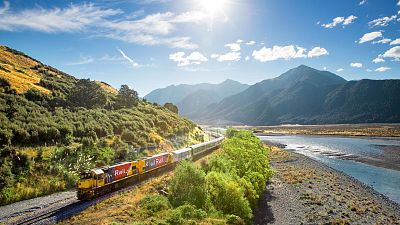 For most of us, travelling by train is associated with the daily commute - an assortment of bustling underground stations, cramped carriages and steadily hiking prices.

But some train trips are about the journey, not the destination.

After much research, we've compiled our ultimate list of the world’s most beautiful train journeys.

First up, we have the Glacier Express - a twisting journey across the Swiss Alps between the mountain resorts of Zermatt and St. Moritz.

Known as the slowest express train in the world, this isn’t a service for travellers looking to get to their destination in a hurry.

It takes just over eight hours in total and chugs across 291 kilometres of stunning, alpine terrain, passing beneath the shadow of the Matterhorn on its way.

Running continuously since 1930, tickets start at €135 for a one-way journey.

Second on our list is the beautiful White Pass & Yukon Route Railway in Canada.

Roughly the same size as Spain, this rugged wilderness is home to more than 160,000 caribou, 70,000 moose and 17,000 bears - so be sure to pack your binoculars for this breathtaking journey through mountain ranges, glaciers and tundras.

It took the labour of 35,000 men to hew out this 177-kilometre narrow-gauge route - but you can enjoy it all from the comfort of a vintage railway carriage.

Coming in third is the famous Bergen Line, a 496-kilometre railroad between Bergen and Oslo in Norway.

Taking in an array of charming villages, large fjords and blue lakes, this is the highest mainline railway line in Northern Europe, boasting stunning views across the Scandinavian nation's snow-covered terrain.

If you’re lucky enough, you might even get to see the largest wild reindeer herd in Europe, consisting of over 9,000 animals.

Fourth up is the West Coast Wilderness Railway, a breathtaking train journey diving deep into the history of the Tasmanian wilderness.

Like many of the train lines on our list, this 34.5-kilometre journey was constructed on the remains of a former mining route, allowing travellers a unique insight into the riches of the ancient rainforests of Western Tasmania.

In fifth we’re hopping aboard Sri Lanka’s dramatic train line between the mountainous cities of Kandy and Ella.

The journey takes seven and a half hours and is often considered the most scenic train journey in the world - and for good reason. With emerald green hills, tea plantations and dense rainforests surrounding the route, be sure to reserve a seat in the panoramic carriage to make the most of your ride.

Unlike many of these stunning routes, tickets for this train are surprisingly reasonable, with a one-way journey costing as little as €1.75.

Grab your sun hat, because we’re heading down under for number six.

Covering 223 kilometres in just under five hours, New Zealand’sTranzAlpine is one of the most breathtaking train journeys in the world.

Boasting spectacular views throughout, this coast-to-coast service operates on New Zealand's south island between Christchurch and Greymouth. It takes passengers across a series of national parks before descending into the country’s former mining capital.

Next up in seventh is the Hiram Bingham, A Belmond Train, Machu Picchu, a once-in-a-lifetime journey into the heart of the Inca Empire.

This luxury vintage train conveys passengers between the Peruvian city of Cusco and the Inca citadel of Machu Picchu - taking in the Peruvian Andes along the way.

Sink into an armchair in the 1920s-style carriages, or make your way to the Observation Car to watch the sun rise above the world’s longest mountain range. This is a train ride that’s sure to take your breath away.

From early spring to late summer, blossoming almond trees accompany the train on its way south, crossing 30 bridges and passing through 26 tunnels. This journey is over a century old and stops at innumerable historic stations on its way from the coastal city of Porto to the beautiful village of Pocinho.

And for passengers looking to get a real taste of Portuguese life, locally produced Port Wine is available throughout the trip.

All great journeys must come to an end, and our final stop is definitely worth the wait.

Last up we’re taking a ride on the **Royal Scotsman, A Belmond Train, Scotland **- an overnight luxury train promising an unforgettable journey across Scotland’s rugged Highlands.

Visiting castles, distilleries and historic sites along the route, this train is the height of indulgence - it even has its very own spa!

And for passengers looking to find their inner Scotsman, they can even have a kilt custom-made for them during their journey.

Watch the video above to see the 9 most beautiful train journeys in the world.