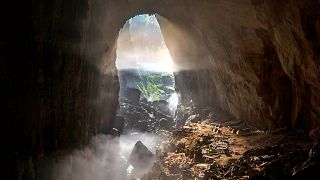 Hidden deep within the Vietnamese jungle, the world’s largest cave is drawing in visitors from around the globe.

It was first explored by a team of British cavers in 2009, who enlisted the help of a local farmer to find the entrance. It has since become a hit with adventurers around the world, eager to explore the location's complex network of tunnels.

"The reason why the cave is so big is the quality of the limestone,” explainsHoward Limbert, an expert studying the site.

“This is the oldest rock in Southeast Asia, 450 million years old. It’s really pure, good quality limestone, and it's still getting bigger. Every year, the cave grows bigger.”

Where is the largest cave in the world?

The grotto now supports an extensive array of rare plant and animal life, benefiting from the high levels of precipitation in the region.

The site was recognised as the world's largest single cave passage by the Guinness Book of World Records in 2009. Its cross-section is believed to be twice that of the next largest passage in Deer Cave, Malaysia.

But it is now believed the cave could be even larger than previously predicted.

"We’ve explored most of the passages,” says Limbert, “but the one passage that remains unexplored is the main river above the first sinkhole.”

Limbert hopes improvements in caving technology will allow his team to conduct more accurate studies of the cavern in years to come.

If proven correct, Son Doong could connect with another cave system entirely, making the passage even longer than current estimates.

Can I visit Son Doong cave?

Son Doong has been open to caving expeditions since 2013.

In order to preserve the location, strict limitations have been imposed on tourism in the area.

"We have to bring a team of porters, rangers and cave experts to accompany visitors on each expedition,” says Nguyen Chau A., director of Oxalis Adventure.

“We have to make sure everything brought into the cave can be carried out again. Each year, only 1,000 visitors are allowed to go on the Son Doong caving trips, in order to minimise the human impact on the cave ecosystem."

Expeditions cost €2,800 per person, and include equipment, permits and professional guides.

Watch the video above to find out more about visiting Son Doong.