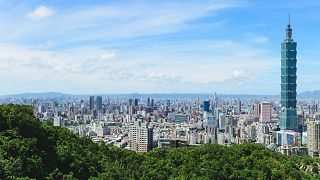 Taiwan has strictly controlled its borders throughout the pandemic. From today, these requirements will be dropped   -   Copyright  Canva
By Charlotte Elton  with AP  •  Updated: 13/10/2022

Visitors to the self-ruled island are no longer required to quarantine upon entry, or to take any PCR tests.

Instead, they will need to test negative on a rapid antigen test on arrival, and monitor their health for a week.

Taiwan’s tourism bureau estimated that a total of 244 tourists from some 20 tour groups will arrive Thursday.

So what are the rules for travel to the region - and how soon should you book your ticket?

What are the travel rules for Taiwan?

Taiwan reopened its borders on October 13. Authorities have scrapped the current requirement that arrivals quarantine in hotels for three days, followed by four days of self-monitoring.

People who were able to enter the country without a visa before the pandemic have been able to do so from 29 September. A ban on tour groups has also been lifted.

“It has finally come to the final moment of the pandemic,” President Tsai Ing-wen wrote on her Facebook page.

“Now, we must make every effort to revive tourism, stimulate the economy and lead Taiwan’s economy to develop by leaps and bounds.”

Visitors who test positive for COVID-19 will still have to quarantine at a hotel or at home.

What are the rules for travel to Japan?

Japan has allowed a small number of visitors since June, but only as part of strictly managed tour groups.

On 11 October, these requirements were dropped and the cap on daily arrivals lifted. Tourists no longer need a visa to enter the country.

"Japan will relax border control measures to be on par with the US," said Prime Minister Fumio Kishida.

In 2019, 31.9 million foreign visitors travelled to Japan, spending 4.81tn yen (€35.2 billion). This revenue all but disappeared when the pandemic hit.

In 2021, the country hosted just 250,000 international visitors. This figure includes all the athletes and support staff who travelled to the country for the Tokyo Olympics.

What are the travel rules for Hong Kong?

From Monday 26 October, travellers arriving in Hong Kong will no longer have to go into mandatory hotel quarantine.

The requirement to show a negative COVID-19 test before boarding a flight to the city will also be dropped.

To cater for a sudden surge in demand, Cathay Pacific has added more than 200 pairs of flights in October.

Travellers will still have to abide by some rules, however. They will have to take a PCR test on days two, four, and six after their arrival. For three days after they land, they will not be allowed to enter public areas like shopping malls and restaurants.

What are the travel rules for China?

Travellers to China face 10 days of hotel quarantine at their own expense.

However, the country’s authorities recently hinted that restrictions might eventually ease.

According to a draft policy document released by China's Ministry of Culture and Tourism in September, tour groups organised by travel agencies may soon be able to run in China's border areas.

This plan is similar to the Japanese tour policy that has been in place for much of this year.