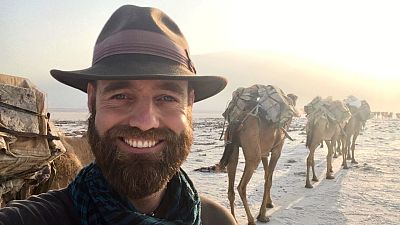 In early 2013, Torbjørn C. Pedersen - or Thor, to his friends - received an email that would change his life forever.

“My father sent me a link to an article and I clicked on it,” recalls the Danish adventurer.

“I quickly realised that no one in history had gone to every single country in the world without flying. The fact caught my interest and stuck with me.”

The former UN soldier was soon packing his bags for what was to become an 8-year adventure spanning 194 countries.

His mission was simple enough: to visit every country in the world without the use of air transportation.

But as Thor quickly discovered, the reality was anything but simple.

“Generally I try to move whenever I can, but it's not always that easy,” he says. “Sometimes I'm waiting for a visa. Sometimes I'm looking for a ship.”

“One time I was on top of a truck for two days in Congo and we had to stop in the middle of the night because there was a risk of bandits.”

After successfully navigating all seven continents, Thor is now just nine countries shy of his goal of visiting 203 countries without flying.

But after two years stuck in Hong Kong due to coronavirus restrictions, the perennial traveller is keen to move on.

“I've had every reason to go home and give up on this, especially throughout the pandemic,” he sighs.

“It's taking its toll on me, but I'm sticking with it and promoting that if you want to reach for something in life that might not be easy, sticking with it is the only way that you can eventually reach your goal.”

Stuck in Hong Kong during the pandemic

In January 2020, Pedersen arrived in Hong Kong on a container ship from The Federated States of Micronesia.

The Dane was scheduled to leave Hong Kong on a container ship to Palau when news of the coronavirus outbreak brought travel to a halt.

“When it was declared a global pandemic, I knew it was game over, at least for a little while,” says Thor.

Instead of spending four days in the city as he had originally planned, Pedersen has now been there for nearly two years - the longest he's stayed in any one place over the course of his around-the-world adventure.

“I thought it was going to take two or three months and then things would quiet down. But it's been a lot more than that now.”

Hong Kong declared a state of emergency on 25 January 2020, after COVID-19 spread to the region from Wuhan, China.

Early measures were taken to contain the virus, including closing schools, implementing isolation measures, and encouraging people to work from home.

While Pedersen is waiting for his opportunity to travel to Palau, the stranded traveller spends his days tackling Hong Kong's many hiking trails, working with the local Red Cross society, and chronicling his experiences on his blog, Once Upon a Saga.

What is the record for visiting all countries by surface transportation?

While Thor’s adventure is anything but ordinary, he is not the only one to have attempted a feat of this kind.

Graham Hughes from the UK currently holds the record for the fastest time to visit all countries by public surface transport, according to the Guinness World Records.

Unlike Thor - who hasn’t returned home to Denmark in over eight years - Hughes was permitted to fly back to Britain twice during his journey.

“To visit every country in the world, in one single journey, without catching a single flight is something that has never been done before,” insists Pedersen, who has experimented with numerous modes of transport throughout the course of his trip.

“Buses and trains have been the bulk of it,” he continues.

“I've had the privilege of being aboard 25 container ships connecting continents and island nations. I've even been on a high-performance yacht, which was quite special.”

But despite being closer than ever to the finish line, the burden of Thor’s adventure is starting to take its toll on the road-weary traveller.

“It's been a long time now and my priorities are changing. I have a wife. We would like to start a family and there’s not an open date about how many years we can hope to pursue that for,” he says.

“If I choose to complete this project and return home, I might realise that it cost me the highest price.”

Nevertheless, the promise of becoming the first person in history to achieve this goal is a tantalising prospect for the self-proclaimed ‘modern viking’.

“I'm not someone who gives up when something is blocking my path,” he smiles.

“I find a way. And for the rest of my life, I'll be able to look in the mirror and know that I tried something incredibly hard and I completed it.”