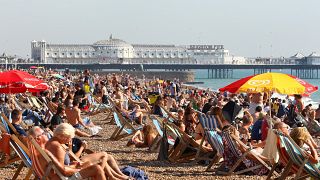 Despite rising energy bills, a labour shortage, heightened inflation and a general cost of living crisis across the UK, Brits aren’t ready to cut down on travel.

In its first Holiday Habits report in three years, ABTA found 61 per cent of its 2,000 respondents will be travelling abroad next year, and travel remains a spending priority despite rising household costs.

Instead, Brits are looking to reduce other non-essential activities, like eating out and clothing shopping, before rethinking holiday budgets.

Where are Brits travelling to in 2022?

In the year leading up to August this year, 45 per cent of ABTA survey respondents travelled abroad.

“This is a large proportion taking into account that travel from the UK was difficult, or sometimes near impossible, for the first six months of the period this report covers,” Mark Tanzer, ABTA chief executive, says in the report.

Spain, France, Italy and the US were the most popular destinations for travellers over the past 12 months. Beach holidays were the most sought-after.

What travel trends can we expect in 2023?

Travel isn’t expected to slow down.

Consciousness of sustainability and green travel is also expected to rise next year - more than half of the people surveyed said they think the travel industry should operate in a greener way as we move out of the pandemic. 41 per cent said they’d opt for one travel company over another if it had a greener record. In 2011, only 19 per cent responded in the same way.

What are the long-term effects of the pandemic on travel?

In short, the pandemic has caused people to pay more attention to practical details.

The long-term effects of the pandemic are expected to be an increase in travel insurance purchases, closer attention to T&Cs, and a more selective process while booking.

Travellers are looking for reassurance that their holiday will go ahead, whatever happens.

“The importance of securing peace of mind - as well as getting good value for money - is leading to higher demand for travel professionals and package holidays, particularly among young people and those with young families,” the report says.

How is the UK’s cost of living crisis impacting spending patterns?

As people in the UK face higher costs for everyday essentials, they’re reevaluating their leisure spending. More than half of the respondents said they’d reduce their spending on eating out to counterbalance the rising costs of living. Leisure activities and clothing shopping came next.

Although travel remains a priority for many, people are likely to change their habits while on holiday.

The report shows almost 30 per cent of respondents will choose cheaper travel options and eat out less while they’re away. A smaller number says they’ll opt for domestic travel within the UK to cut costs.