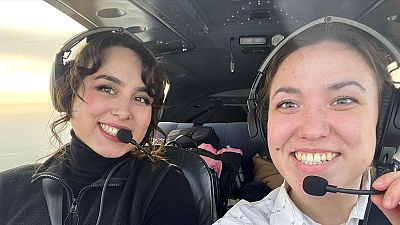 Welcome to Euronews Travel’s Women Beyond Borders, where we bring you women from across the world who are living brave, adventurous lives, and conquering personal challenges on the road.

While some are crossing the world in pursuit of the most unique experiences, or pursuing a lifestyle that many would dream of, others are breaking the mould of traditionally male-dominated industries. We hope the series inspires you to believe in the power of your own dreams.

When you think of a pilot and CEO of a travel company you probably don’t picture a 24-year-old woman. But Mia Biilmann Larsen is exactly that.

It’s estimated that just 5 to 10 per cent of commercial pilots worldwide are women. Despite this statistic Mia says she never felt held back as some of the pilots in her family-run company, AirZafari Greenland, are female.

“It hasn't really been something that I thought that I wouldn't be able to do because I'm a girl or a woman. I've never had that experience,” explains Mia.

“But seeing people's reactions now to whenever I say, ‘Yeah, I'm a pilot’. It's like they just expect me to be the one introducing the experience and then the pilot will come and take over.”

Mia says she’s had an overwhelmingly positive experience as a female pilot. But she did tell Euronews Travel of one example of sexism during her pilot training.

‘[I was] sitting in my uniform and talking about some of the planes we were watching.”

“I said, ‘Oh, it's such a beautiful jet’ and everybody was looking at it and nodding.

“And then one of them said, without even thinking about it, ‘Oh, yeah, maybe go ask if they need a stewardess’.”

“And I was like ‘I would love to be a stewardess, but that's not why I'm here. I'm in my pilot uniform.’”

Flying has always been a big part of Mia’s life. Growing up with pilot parents, they went on all sorts of adventures, a privilege Mia is hugely grateful for.

For a long time, she thought her career might take a different path but soon realised flying was her vocation.

She began her pilot training in 2019 in Denmark and once completed, headed back to Greenland to join AirZafari as a pilot. She became CEO in 2021.

“It's so amazing to, on a daily basis, have a job where you share experiences that are adventurous, that are new and exciting to people.

Mia’s work sees her taking both locals and tourists on flights from the country’s main airport at Kangerlussuaq and from the largest town in western Greenland, Ilulissat to above the arctic surroundings and to the ice shelf.

According to Mia, “It's a spectacular view regardless of how many times you've seen it” and it’s not uncommon for guests to cry tears of joy during the flight. She often sheds a tear too.

Though there’s countless moments that stick in Mia’s head from incredible light to emotional connections with guests, one of Mia’s most special moments so far was the first time she flew to Nuuk, the capital and her hometown, with her parents onboard.

Greenland contributes less than 1 per cent of the world’s total carbon emissions but it’s one of the places suffering the effects the most.

Mia has noticed the change in Greenland’s weather during her lifetime, becoming warmer, wetter and cloudier.

According to NASA data, the entire country is losing 254 billion tonnes of ice mass per year. Over 100 billions tonnes more than Antarctica.

Many locals have never seen the shelf, but Mia is lucky enough to fly over it regularly.

“It's something that is happening in our backyard, but we have a very big backyard,” she explains.

To help raise awareness and educate locals, Mia now offers empty seats on her flights to children from local schools.

“I've definitely flown with some locals that are very surprised by the size of it,”

“For the few that have gone, either by another plane or helicopter before, many years ago, for them to come and see it again with us, some are really surprised and overwhelmed by how much it's changed.”

Watch the video above to learn more about Mia flying in Greenland.