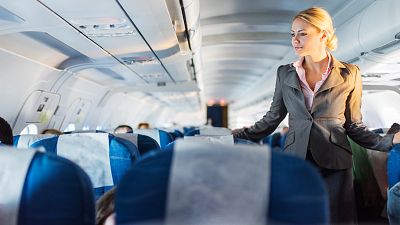 Flight attendants may have the best job in the world, but there are still ways for passengers to make things better.   -   Copyright  BraunS/Getty
By Hayley Ashworth  •  Updated: 08/05/2021

Being a flight attendant is a fantastic job – we stay in beautiful hotels, we travel the world and the work-life balance rocks.

But it’s also incredibly lonely. We miss out on a lot of family celebrations, and we’re constantly putting our bodies through hell.

We also deal with a lot of difficult situations - from drunk and abusive passengers to heart attacks to someone having a strop because there’s no more Dairy Milk chocolate.

So here are nine things every flight attendant wants you to know before you step foot on a plane.

Asking the window shades to be open for take-off and landing – your flight and cabin crew can’t see the wings or engines from our take-off places. We need you to see them in case one of them is on fire.

Is the seatbelt sign on while there’s no turbulence? Chances are, there’s a thunderstorm or two near our flight path. If we catch the energy from a storm, the plane can drop a few thousand feet, and trust me, you want your seatbelt on for that.

That way, we know to come and calm you down during turbulence and can explain all the funny noises that happen during take-off and landing.

But also so we don’t mistake your nervousness for drug smuggling.

Yes, we flight attendants are incredible human beings that seem to defy jetlag, but we are not all-knowing.

We do not know:

In most airports, we either have our own immigration routes or get on a bus straight from the aircraft to our hotel, so we rarely see much of the inside.

This can be anything from a big box of chocolate to you clearing up your own mess. (Yes, we do judge you based on how much mess you leave. Based on what I’ve seen, I really do wonder about the hygiene of some people’s homes.)

I'm afraid we won’t upgrade you for giving us a box of Ferrero Rocher or for fastening your seatbelt without being prompted (again) or for displaying any sort of good manners. But we will definitely be nicer to you.

5 – If we say we don’t have anything, we genuinely don’t

The aircraft is not fitted with infinite resources and products.

You guys also like to bring on a lot of luggage, so space is often very limited.

So when we say there’s only one blanket per person, or there’s no more chicken left, it’s genuinely because that’s the case.

Trust me, I want to say yes and give you everything you think you deserve. It makes my life so much easier. But when there are 300 of you all asking for the same things, we eventually run out, and the answer becomes no.

Plus, there are strict company policies about upgrades and giving products from other cabins.

The passengers sitting in First or Business class have paid a lot to be there, so no, we can’t give you the Dom Pérignon or move you to a €10,000 seat.

6 – We are categorically not allowed to lift your luggage

If we put out our backs by lifting your case, it is not classed as an industrial injury. This means we don’t get sick leave and our treatment isn’t covered.

7 – We hate delays just as much as you do

We show up for work about three or four hours before the flight departs.

If it’s a night flight, chances are we haven’t slept, and we won’t be doing so for a while.

We also don’t get rest during the flight if it is shorter than eight hours.

So while delays are an inconvenience for you, please don’t take it out on us; we’re suffering just as much.

At least once a week I was asked, by total strangers, whether I have ‘special friends’ all over the world. And usually, it was worded less delicately than that.

Please don’t ask us this. It’s particularly upsetting for those of us who haven’t yet managed it.

We haven’t eaten or sat down in hours. We’re desperate for the loo. We have personal issues that can’t be resolved because we’re on the other side of the world.

And while we appreciate that this is customer service, please remember that we are humans with feelings.

So sit back, enjoy your flight, and be nice to your flight attendants.

Do you have any questions you want to ask flight attendants? Get involved in the conversation on Twitter using @euronewstravel.