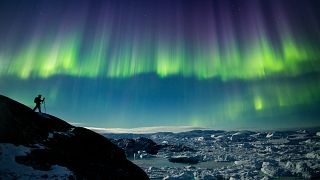 The top three experiences of my life have all happened while travelling: driving from San Francisco to Las Vegas through Yosemite and Death Valley; floating through ancient caves illuminated by glow worms in New Zealand; and camping on the Greenlandic ice cap under the northern lights this August.

The first two on my list are fairly well-known must-do activities when visiting those parts of the world. I knew before I started my journeys that they would be once-in-a-lifetime moments - but my recent Greenlandic adventure was an unexpected experience that will stay with me forever.

I will spend the rest of my life urging people to visit Greenland, so here’s why you should book a trip to the world’s largest island.

You should visit Greenland if…

I will emphasise this point heavily. If your idea of a holiday involves 5* hotels and luxury spas, this is absolutely not the country for you.

In fact, the official tourism board of Greenland has an entire section of their website explaining why it’s not for everyone.

But if kayaking through fjords and dog-sledding across the ice sounds fun to you, then there’s nowhere quite as extreme as Greenland.

I was only there for a short visit, but my trip still involved a perilous walk on the ice sheet, an extremely memorable trip in a UTV (ultra-terrain vehicle), and being escorted away from the glacier I was photographing because it was at-risk of collapse.

The accommodation I stayed in was a former military barracks, now used occasionally for training, but mostly for scientists on expeditions. All the hotels in Greenland are part of the EU’s Hotel Stars Union, which means they are starred according to European standards. However, the majority of the hotels are generally pretty simple in terms of amenities.

But if you’re going to Greenland for a luxurious night’s sleep, you may want to reassess.

There are a lot of places around the world where you can see the northern lights, sure. But where else in the world can you look up at a natural wonder while standing (or lying down, in my case) atop an equally stunning natural wonder.

It’s a beautiful landscape you cannot see anywhere else, but also one that’s changing rapidly.

The Greenlandic ice sheet is the second biggest body of ice in the world - and it is absolutely vital. If the entirety of this ice cap were to melt, global sea levels would rise by 7.2 metres. This ice is already being lost at a drastic rate, with surrounding glaciers receding dramatically.

Seeing the northern lights was certainly a breathtaking experience, but it was made even more memorable by the vast mass of fragile ice, stretching out in all directions beneath my feet.

I camped on the ice cap near Point 660, a short drive from the town of Kangerlussuaq in west Greenland. This spot is routinely used by climate and Arctic scientists, as it’s the most accessible point on the ice sheet.

The camping experience I had, run by Albatros Arctic Circle, is definitely not for the faint-hearted. The midnight walk in the freezing cold on a dark ice sheet, followed by putting up our own tents in furious wind was certainly a test for even the fittest in my group - but I would do it again in a second if I could.

…are happy without a car

It’s worth noting that no two towns in Greenland are connected by road. That sounds like a strange internet conspiracy, like the hoax rumour about gardens being illegal in New Zealand, but I can assure you it’s true.

I’ve been on the longest road in Greenland, which extends from Kangerlussuaq to Point 660 – and it’s not long. There are only 150km of roads in the whole country, only 60km of which are paved.

There are exciting plans to link Kangerlussuaq to Sisimiut formally by road, but for now the iconic 160km-long Arctic Circle Trail is perfect for hikers, less so for vehicles.

The best way to get around depends on the time of year. In the summer, you can travel by boat, and when the fjords freeze over in the winter there are opportunities to travel by dog-sled.

Generally, all the major towns are connected by air, either through domestic flights or helicopters.

As much as Greenland is a place of adventure and outdoor activities, there’s also a rich and beautiful culture to be appreciated.

The country’s history dates back around 5,000 years, with several waves of Inuit immigration from North America. From the art and fashion, to the architecture and cuisine – Inuit culture is at the heart of Greenlandic life.

Although around 80 per cent of the population are Inuit, European colonialism means modern-day Greenland is fused with Scandinavian cultures and traditions as well.

This also meant that for a long time, Greenlandic artefacts were seen as the property of Denmark, until a repatriation agreement was struck in the 1980s. Now, the National Museum of Greenland in the capital city Nuuk has received more than 35,000 artefacts, making it a must-visit for anyone looking for some culture while there.

For a more experiential taste of Greenlandic culture, there is a wealth of packages that let you get a closer idea of key traditions. From costume making to seeing a drum dance - there are plenty of cultural things to do.

…want to learn about Viking history

One of the key figures who came up time and again in conversation while I was in Greenland was Erik the Red.

My Viking history was extremely rusty before my trip, but I was fascinated by his story and time in Greenland.

It turns out Erik the Red is the reason Greenland is (somewhat deceptively) named Greenland. Despite having very little green on the island, he wanted to create the impression of fertility to encourage more people to settle with him.

The Narsarsuaq Museum in southern Greenland has an entire collection dedicated to this interesting slice of Norse history.

…you want to see the climate crisis in action

My trip to Greenland coincided with one of the only instances of rainfall on the ice sheet. As an environmental journalist, faced with the enormity of global warming every day - you’d think this wouldn’t phase me. But seeing how shocked, and genuinely upset, our Greenlandic guides were by this rain moved me (and others) to tears.

I don’t think anyone needs to see the extremes of the climate crisis in person in order to care, but it was a truly sobering trip in many ways.

On another day I visited Russell Glacier, and as I was photographing the ice, a huge chunk cracked and fell into the water. The other journalists with me just stood in silence for a long time after it fell, as we took in the enormity of what we’d witnessed.

Russell Glacier, near Point 660, was a particularly beautiful place to see in person. My guide showed me how large it was five, ten, twenty years before - and it was truly astonishing how quickly it has melted.

How to get to Greenland from Europe

If I’ve done enough to convince you to visit Greenland - and I hope I have - you may now be wondering how to travel there.

There are no international ferry connections to Greenland, but there are cruises that sometimes visit parts of the country. However, these cruises are usually part of longer tours and are not the best way to travel directly.

Currently, the best way to travel is via commercial flights from either Iceland or Denmark.

From Iceland, you can fly with Icelandair from Reykjavik to Kulusuk in east Greenland or the capital Nuuk in west Greenland. There are some seasonal flights available from Iceland too, but these vary throughout the year.

From June 2022, Icelandair is opening a new route to Narasuaq in south Greenland.

From Denmark you can fly to Kangerlussuaq in west Greenland all year round, or to Narasuaq in the summer.