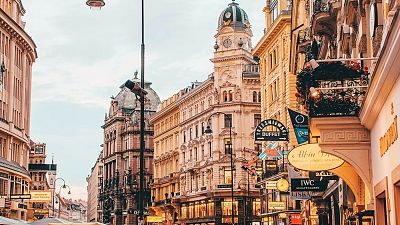 'In the still of the night'. Looking up from my window seat table that's what I'd always see inscribed on the Haus des Meeres Tower in central Vienna.

The tower, a large WW2-style concrete block, is surrounded by parks and children’s playgrounds. It’s actually been transformed into an aquarium, and you can rock climb up its side to get a stunning view of the Viennese skyline. I never knew why that particular phrase was printed there, and I still don’t know. As a fan of the jazz guitarist Django Reinhardt, I’d like to think it's a reference to his quartets rendition of the popular song, In The Still of The Night.

Whatever the reason, it didn't matter enough for me to look it up. Normally in between taking frequent glances at the tower I'd be preoccupied with other things: reading, completing university work, and drinking Americanos out of a cup too small for my liking. This was always in the café Schadekgasse 12, a small, elegant, and stylish café on a street corner, and a popular spot for me to work, relax and meet friends.

What I adore about this café is that it never tries too hard. It’s a perfect combination of everything Viennese café culture is about, both in its layout and design - and menu. That’s one of the best things about Viennese café culture; its variety. From modern to fancy, from traditional to classical, Vienna has it all and in some ways it can be overwhelming.

Cafés for people with a love of the classical

Taking your first steps out onto the streets of Vienna, it won’t be long before you realise you’re immersed in a place that values the finer things in life. The popular image of Austria being a country of fine arts, opera, and academia are pretty much, in my opinion, true. Vienna is very much a city that is proud of this history, and not only celebrates it, but lives it.

This is apparent in some of Vienna's most interesting and well-preserved coffeehouses. If you’re looking for a more grandiose experience of the local café scene, then you should look no further than Café Central.

Inspired by Venician and Florentine architecture, the Austrian architect Heinrich von Ferstel has created a palace right in the heart of Vienna, which is as beautiful in its design as it is in its historical ties to the city.

With its high, church-like ceiling, marble columns, and low bearing chandeliers this is easily one of Vienna's most aesthetically appealing cafés, and transports visitors back to the city’s imperial past. With long, draped curtains and a golden glow, this Kaffeehäuser serves up meticulously crafted cakes, coffee, and hearty Austrian dishes. Café Central is the place for anyone who wishes to enjoy their coffee and company in a coffeehouse true to Vienna’s spirit as a city of extravagance.

What’s fascinating about this place is its famous ‘Centralists’ regulars, and the well-known figures who have frequented the café in its history. Café Central has hosted poets, novelists, artists, philosophers, scientists, and revolutionaries, walk through its doors, including the likes of; Sigmund Freud, Adolf Loos (famous Austrian architect), Theodor Herzl (father of the political Zionist movement), Leon Trotsky, Lenin, Stalin, Alfred Polgar (an Austrian dramatist who had a continuous chess rivalry with Trotsky), Josip Broz Tito (Former leader of Yugoslavia) and Adolf Hitler.

Pogar, who wrote about the events of the café in ‘Theory of Café Central’ describes a coffeehouse of intense debate, followed by chess, cigars, coffee and a sense of homeliness where regulars like Peter Altenberg even had their mail and dirty laundry sent.

To drink coffee within those walls is to sit where history was made. This is what Vienna was - and still is - all about. A meeting point of some of history's most formidable figures. Should you have the privilege of visiting, I advise you to look around. You never know who you may be drinking with.

One of the biggest culture shocks when I first landed in the city six years ago wasn’t the fact smoking indoors was legal, but rather how coming to Vienna is like taking a step back in time. Vienna has two imperial palaces, endless rows of 18th and 19th century buildings and old relics of the city’s much earlier history. But what always stuck with me was the Viennese love for keeping the 20th century alive and kicking.

Aesthetically, the 20th century never really left the city and you can see that in many different guises. One of those is Vienna's coffee houses, that capture this love affair with a time gone by.

Should you be in the mood for some cake with your coffee, then the franchise Aida Cafe Konditorei is a safe bet. This is an Austrian chain, and offers guests a charm you won’t find in your local Starbucks with its signature pink neon sign, and bright pink ’70s layout. Aida is a ‘Konditorei’ (pastry shop), and offers incredible sweet Austrian cakes and pastries - with great coffee, of course.

At Aida, the mood is easy and everyone can get along. In a city with so many options, it’s a comforting feeling to know you are never too far from an Americano at Aida.

If supporting an independent establishment is your preference, then look no further than Café Prückel. Just across the road from the Museum of Applied Arts, this café is a beautiful example of 1950s café culture. Every aspect of this establishment has remained how Oswald Haerdtl redesigned it, frozen in the ‘50s, and the attention to detail preserves the aesthetic effortlessly. This, too, is part of the city’s charm: the pretty, pleasing and pleasant remains present - no matter how many years later.

Like lots of Austrian cafés, traditional dishes are on hand, and - incredibly - breakfast is served until 2pm. Given its proximity to the museum, as well as the University of Applied Arts, the café has a reputation as being a hub for arts and culture, hosting events and live music. In the 1930s, the café became famous for being the birthplace of Der liebe Augustin cabaret, which was founded in the basement.

Another fine example can be found a short walk from the Schottentor u-bahn stop, where there lives a café that has the glitz and glamour of Vienna whilst fantastically holding on to its past: Café Landtmann.

Located in one of the most beautiful central parts of the city, Café Landtmann is a short distance from the Rathaus (city hall), the Liechtenstein Palace and the University of Vienna campus. Many a cold November evening I would stroll past on my way home from the university, admiring the warm glow of a café that has at all costs held true to the principles of excellent presentation, and provided an authentic Austrian experience. The Landtmann has a special position within Vienna being one of the city’s most prized cafes, and a fun fact, it is famous for being a favourite of Sigmund Freud.

A focus on simplicity

Simplicity is probably the most significant part of what gives Vienna’s coffee houses their reputation. Their ability to perfect an art of ‘not too little, not too much’ that others have tried and failed to achieve. For me, the simplicity of the Viennese coffeehouse is like the food of Italy. The ingredients are simple but effective, add a little time and effort, and the end product is delicious.

For example, Schadekgasse 12 isn’t a particularly glamorous café, just a modern, even ‘neutral’ coffeehouse. But it has this warm, welcoming aura that so typically captures the city - which is all it needs.

Schadekgasse 12 doesn’t boast a fancy layout. Its decor is a modest set of comfy chairs, rickety metal tables, and a timeless counter surrounded by plants, coffee machines, and international spirits. The tables are lit by candles in the evening, making the comfy surrounding of the place feel like home.

Café Schadekgasse 12 is an all round lovely place to sit and do - which is reflected in its crowd. Throughout the day its occupants watch the change in people passing through. Around midday, the artistic and serious arrive, writing notes, lighting cigarettes, and reading newspapers suspended in brass brackets. Come the evening, and the students and immaculately suited professionals finishing work join for an evening beer. It’s worth mentioning that while there are cafés that hold true to caffeine, in Vienna, a lot double up as a bar.

It's truly impossible to give a full synopsis of what Viennese coffee is all about. If, however, there is anything to take away from what the Viennese coffee experience is trying to teach us, it's that tradition, simplicity, and care go a long way in making something that bit more special.

The new museums and galleries you need to visit after COVID