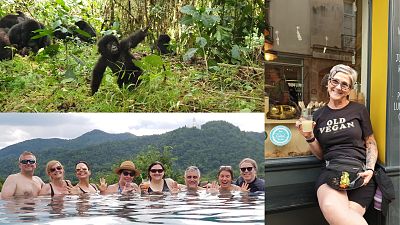 Food is such a big part of travelling. But sometimes, if you have dietary requirements, travelling to certain countries can feel a little bit daunting.

In many of the world’s major cities, vegan food is now available on every street corner - but that isn’t the case everywhere. Sometimes when you’re on holiday, you just want to relax without having to think about where your next meal is coming from. That’s where World Vegan Travel comes in.

What is World Vegan Travel?

World Vegan Travel is a luxury group tour company. Founders Brighde Reed and Sebastien Ranger have been vegans for over 13 years and discovered through their own experiences that vegan travellers didn’t always get the best quality experience for their money.

“This was part of the fun, but it's not necessarily fun for everyone. Sometimes people just want to relax on holiday, which was one of the reasons why we created World Vegan Travel,” Brighde tells Euronews Travel.

“My partner and I have always been really passionate about travel. I was a tour leader for a travel company in the early 2000s for about five years,” Brighde adds.

The benefits of group travel

Although group travel might not sound like everyone’s cup of tea, Brighde, Sebastien and their travellers have found travelling with like-minded people creates a much more relaxing vegan environment for them.

“I think when you're travelling on a group trip [...] vegans could often be quite guarded when they're around other people. They are very aware that their values conflict with other people. And this can be a little bit challenging at times. But when you are travelling with a lot of vegans, you can really absolutely just let your hair down and relax,” explains Brighde.

“I don’t know that I would have considered group travel in any other situation because [...] you’re never quite sure if other people are going to be on your wavelength. That has not been a worry at all on this trip,” says Doug, a traveller on one of WVT’s tours through France and Germany.

How is a vegan holiday different from a regular holiday?

World Vegan Travel spends months working with all of the hotels, restaurants and cafes on the trips’ itinerary to plan delicious and local style meals, veganised.

“I realised that there was a way to see the world in which you could go as a vegan and not have to worry at all about being vegan,” says vegan traveller JL.

On their holidays to France, travellers have enjoyed vegan fondue, tartiflette, fois gras, cheese boards and France’s famous patisserie. All of the French classics.

Other aspects of the trip are adapted too. For example, choosing hotels with vegan friendly furnishings - you won’t find animal trophies or leather sofas here, and building the itinerary to include learning about animal conservation in that area.

On some holidays World Vegan Travel take over and veganise an entire hotel for their trip.

World Vegan Travel’s previous tours have included Thailand, Vietnam, France, Germany and Rwanda including a visit to see wild gorillas. They also often team up with Colleen Patrick-Goudreau, a popular vegan writer and podcaster on their tours to include talks during the trip.

Watch the video above to learn more about World Vegan Travel.

Bridge diving in Bosnia: Brave enough to make the leap?

This European capital is the world's biggest urban vineyard