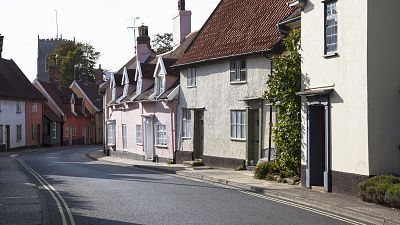 A number of tiny villages and towns in the UK are home to some very famous faces.   -   Copyright  kbwills/Getty Images/iStockphoto
By Lottie Limb  •  Updated: 12/10/2021

Walking down the streets of LA or promenades in St Tropez, you wouldn’t be surprised to spot a familiar face.

Given some of the biggest A-listers in the world have found fame on the silver screen, the hubs of Hollywood and Cannes are home to many.

But what about the quieter corners of the world where celebrities have settled?

Getting away from the bustle of main cities might afford some peace, but the great and good are likely to make a bigger splash in a smaller pond.

Take the rapturous reception that greeted American actor Matt Damon when he chose to rent a mansion in the Irish suburb of Dalkey during lockdown.

Here we take a look at nine lesser-known spots that celebs call home.

The notoriously flat lands of Norfolk may not be everyone’s idea of paradise. But for national treasure Stephen Fry they have a familiar pull, as the UK actor and TV personality grew up in the village of Booton, near Norwich.

He now lives nearer King’s Lynn, in a little village called West Bilney. Speaking to Eastern Daily Press about growing up in the remote area, he says the following.

“All the things that make Norfolk a difficult place for someone with artistic sensibilities, pretensions and hopes to grow up in also make it a wonderful place because you find other people who feel like that.

“Unlike living in London, it is a rarer thing to be pulled into the artistic world, therefore there is an excitement when you find each other.”

The stunning beaches and rich birdlife of Norfolk also make it a charming place to live.

Power couple Amal and George Clooney call many places home, and one of them is a small village in Oxfordshire.

The human rights lawyer and film star have a residence in the hamlet of Sonning Eye, an island in the River Thames.

The Clooney family often swap the green fields of Oxfordshire for the shores of Lake Como in Italy during the summer, a more popular celebrity spot.

It sounds like something from a movie, or the plot of Schitt’s Creek, but actor Johnny Depp really bought an entire French village 20 years ago.

The run-down hamlet near Saint Tropez underwent the star treatment, and has been returned to its former glory - with some slightly eccentric touches.

If you’ve got a spare €48 million you can take it off Depp’s hands, as it’s now back on the market.

Sure, Zurich has a glamorous sound to it, but it’s a far cry from Hollywood where American-born singer-songwriter Tina Turner has a star on the Walk of Fame.

She has lived in various places around Europe, including London and Cologne in Germany, before settling in Küsnacht, a municipality in the Swiss city of Zurich.

Her house is close to the stunningly clear blue waters of Lake Zürich.

The world is Julia Roberts’ oyster, but rather than living the highlife in LA or New York like most actors, she has landed on the town of Taos in New Mexico.

She reportedly fell in love with the mountain town in the 1990s, and purchased a 40-acre ranch to kick back in. The altitude in Taos means that temperatures vary considerably, with sweltering days followed by cold nights. Worth packing layers if you’re thinking of following in the film star’s footsteps.

Acting legend Daniel Day Lewis is well known for his immersive approach. In between intense roles, the now retired actor would retreat back to his farmhouse in the village of Annamoe, County Wicklow, Ireland.

A valued member of the community, Day-Lewis was awarded the Freedom of Wicklow in 2009, and talked movingly about the freedom that he has long found in the county. "That's one of the reasons why this place suits me so well because I'm allowed to go quietly about my business," the three-time Oscar winner said.

"The truth is I don't notice [the pressure of celebrity] around here because I'm allowed to live.”

It’s no surprise that acting royalty Nicole Kidman lives in Australia, but did you know she’s chosen a small village in the hills near Sydney, rather than the star-studded Byron Bay?

There’s nothing small about the house itself, however, a mansion on a 45-hectare angus beef cattle stud in Sutton Forest. The Southern Highlands area, with its rolling hills, is reportedly becoming more and more popular with celebrities.

The Scottish capital is too big and dynamic to be put on the map by any one person, even the creator of Harry Potter. Yet J.K. Rowling is certainly the most famous face in Cramond, a suburb on the outskirts of Edinburgh.

A giant 30-foot hedge separates the author from prying eyes in the old fishing village. She also has a huge estate near Aberfeldy in Scotland, and has recently acquired her childhood home in the Gloucestershire village of Tutshill.

Another celebrity attached to his East Anglian roots, Ed Sheeran lives in the old market town of Framlingham in Suffolk.

The popstar has bought up a number of properties in the area, dubbed ‘Sheeran-ville’ by locals. It stretches to 16 acres, giving Framlingham Castle a run for its money.