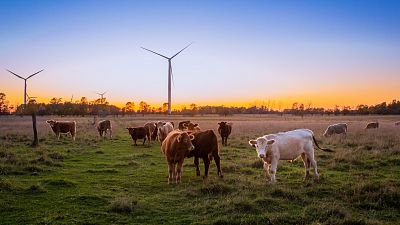 Livestock play a large factor in meeting the 2050 goal for Europe to be self-sustainable in the agriculture sector   -   Copyright  Canva/Unsplash
By Sabrina Fearon Melville  •  Updated: 21/06/2021

It could be possible to feed the entire population of Europe without imported food by 2050, says a study conducted by the French National Center for Scientific Research (CNRS).

The study, which looks to the past to change the future, found that environmental factors and the increased use of synthetic fertilizers since World War 2 have meant that Europe has continued to import agricultural goods.

Animal products eg. meat, dairy and fish, vegetable products and foodstuffs are all imported from outside of Europe in order to feed us and keep our shelves stocked.

In 2020 it was reported that 47 per cent of our vegetable products were brought in from outside of Europe.

How do our food systems need to change?

The scientists at CNRS say that with a three stage process, we could have “an organic, sustainable, biodiversity-friendly agro-food system” It could mean independently producing our own food by 2050.

The first step involves a change in diet, including a reduction in the number of animal products we eat.

By limiting the consumption of animal products, there would be less pressure on livestock farming and as a result less desire for imports.

The second step would involve getting rid of “industrial agriculture” by creating space to diversify crop rotation using the soil and earth already available.It is expected that this would also lessen the number of synthetic pesticides and fertilizers used, reducing the amount of nitrogen produced and released into the atmosphere.

The final step includes the joining together of crops and livestock which never really meet in the current industry. The scientists hope that this close proximity of animals and plants would allow for a smoother manure recycling process.

With this three step process, Europe could be a key player in the food exports industry by 2050.