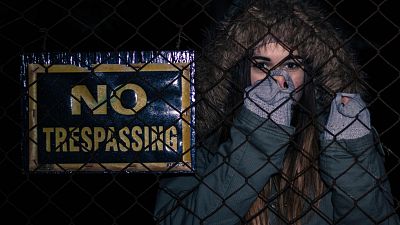 From people making forbidden trips to visit the world’s tallest tree to tourists taking mopeds for a ride through Pompeii, some of us love to go where we shouldn’t.

Beyond banned destinations, locations that are at risk of disappearing also draw huge crowds - even when increased visitor numbers cause further damage to the places we want to see most. Thousands of people every year flock to delicate and beautiful regions that might not be the same by the end of the decade.

So why do we do it and what is the appeal of adventures we are told not to embark on?

We spoke to Matt Johnson, an expert in consumer psychology, to find out.

Why do we visit forbidden destinations?

Recently, officials at California’s Redwood National Park warned intrepid tourists they could face a $5,000 (€4,912) fine and time in prison for visiting the world’s tallest tree. There are no official paths to the site, they warned, and increased footfall is damaging the surrounding forest.

And yet, spurred on by travel bloggers and influencers sharing its exact location, a significant number of hikers still trekked through the undergrowth to see this record-breaking tree in person.

There’s a range of motivations for visiting places tourists are expressly forbidden from going to, according to Johnson.

“Some, for example, have the belief that the world is for people to enjoy and see, and that no government or organisation has the right to restrict their visitation. They reject the authority, and perhaps even go to visit these sites as a statement of rebellion.”

For others, it's the scarcity of the experience that makes them want to go. When visiting a site is illegal, it makes sense that few people will have taken the risk to do so.

“There is likely something very valuable to a certain subset of travellers about the rarity of a travel experience that so few people have had,” Johnson explains.

Influencers, travel bloggers and writers - like those revealing the location of the world’s tallest tree - can have a big impact on people’s perception of doing something illegal too.

“One thing that savvy influencers excel at is creating a like-minded community. And if they’re able to convince their audience that going to a certain forbidden place is acceptable, it normalises the visit.”

If everyone around you thinks something is OK to do, you’re very likely to adopt that same line of thinking.

Johnson says that ordinarily if you were to express interest in visiting one of these sites, you’d receive pushback from family and friends - what psychologists call countervailing influences. In the context of an online community where everyone believes it is acceptable, this kind of behaviour is normalised.

“If everyone around you thinks something is OK to do, you’re very likely to adopt that same line of thinking.”

What is the appeal of ‘last chance’ tourism?

Even when visiting a destination isn’t illegal, some holidays have a negative impact on the place you choose to visit.

Climate change has triggered a flow of tourists to Greenland, for example, who feel the need to see its magnificent glaciers before they are gone forever. These beautiful natural surroundings could soon disappear and it is this threat that is fuelling an influx of visitors.

“The general trend in consumerism is that as opportunities become scarce, the demand for them increases. The same is especially true for travel,” Johnson explains.

“When it becomes clear that a certain place may not be around for too much longer, this increases the demand to go visit it during the narrow window that it’s still around.”

Once-in-a-lifetime opportunities are very difficult to pass up.

But the more people who visit, the more a place is damaged by the high numbers of tourists and the flights they use to get there. Even if we know our holiday will damage the destination, Johnson says the urge to see rare sights before they disappear is so strong it overwhelms ethical concerns for many people.

“Once-in-a-lifetime opportunities are very difficult to pass up.”

The individual impact of each visitor is perceived as just a small part of the overall problem. This means the damage each person feels responsible for is minimal, reducing the burden of guilt for many tourists.

“The degradation really comes when this behaviour is done by thousands of people over several years. And so it’s very easy for any given person to think that there is nothing really wrong with this kind of behaviour,” Johnson adds.

What can we do to prevent tourists’ bad behaviour?

To discourage people from visiting places they shouldn’t, we need to paint the bigger picture. When we focus on the individual, there’s a tendency to assume we are the only ones doing something and that our actions don’t matter.

“As humans, we tend to have a very difficult time thinking about our behaviour within a greater pattern of activity,” Johnson says.

The trouble is when thousands of people all think that they aren’t making much of a negative impact, they do, collectively, have quite a large negative impact.

“The trouble is when thousands of people all think that they aren’t making much of a negative impact, they do, collectively, have quite a large negative impact.”

As more people visit, Johnson says we feel like changing our behaviour won’t do anything.

“I also think that people can be very cynical about other people’s behaviour, which leads to a kind of cynicism about making these visits,” he says.

“You may think, ‘Well, no one’s going to stop visiting it. I may as well visit too, and see it while it’s still around’.”

People embark on these kinds of trips because they’ve come to believe that it is socially acceptable to do so - even if the consequences of getting caught are severe.

Showing tourists that not everyone thinks it is okay to do what they are doing could be key to dissuading them from damaging or illegal behaviour.

Johnson explains that “tactics could be employed to reduce this line of thinking by pointing out how negatively this behaviour is actually viewed.”

This, he concludes, provides these strong “countervailing influences” that are often missing in the communities that normalise visiting places we shouldn’t.