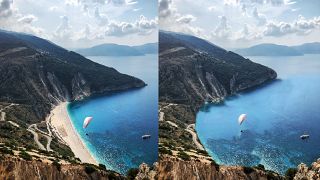 There is expected to be as much as 304m of coastal erosion in the area around Myrtos Beach, Kefalonia.   -   Copyright  Unforgettable Greece
By Giulia Carbonaro  •  Updated: 07/03/2022

The blazing sun, the spectacular beaches, the Mediterranean lifestyle and the gorgeous food. For these reasons and many more, millions of people travel to Greece every year.

The country has been one of Europe's most popular summer destinations since the 1950s, the same decade when island-hopping became a must-have experience for tourists.

With almost 15,000 kilometres of coastline, Greece has options for every taste and every budget, whether you like a more reserved, wild beach or you’re looking for a busy, trendy place to dance the night away.

And yet, this Mediterranean paradise might not be there for much longer. Nearly one-third of Greece's coastline is eroding. And while coastal erosion is a natural phenomenon, climate change is accelerating it at an unsustainable pace.

Scientists estimate that global warming will cause the erosion of 36,097 kilometres of sandy areas worldwide in 30 years' time if temperatures continue to rise at this pace. The combined global coastline totals 356,000 kilometres, according to estimates - so that would be a 10 per cent loss.

A large proportion of the world's sandy beaches are already eroding, as satellite pictures show quite clearly. In 2021, the European Space Agency compared satellite images of the Greek coastline from 1995 to 2020, finding that almost 10 per cent of the 900 kilometres of land studied had been receding by more than three metres every year.

Experts fear that almost half of all such beaches could be close to extinction by the end of the century, as mentioned in a study by the Joint Research Centre of the European Commission.

Greece is terribly exposed to coastal erosion, which is expected to profoundly change the country’s coastline in the next 80 years. In fact, some of the world's favourite holiday hotspots, from Santorini to Mykonos, might not be the same by 2100, a research by luxury travel company Unforgettable Greece revealed.

The company has used Photoshop to create incredible before-and-after pictures that show the coastal erosion to be.

The coastline is expected to recede dangerously close to Santorini’s iconic whitewashed buildings, as 150 metres of coast around Fira is set to be swallowed by the sea.

Myrtos Beach, considered one of the most beautiful beaches on the entire planet, might completely disappear after 300 metres of coastline gets washed away. That's about the size of London's The Shard, Renzo Piano's Mordor-style skyscraper.

The Egyptian Lighthouse of Chania in Crete, another iconic symbol of Greece, will also be gone by the end of the century if temperatures continue to rise.

Little Venice in Mykonos might cease to exist, as up to 195 metres of coastal erosion will destroy a lot of the town in less than 80 years' time.

While you may feel powerless in the face of such statistics, there are two things you can do with this information. First of all, you can go and see these breathtaking beaches before they disappear forever. But if you must, make sure you travel there in a sustainable way, so you’re not adding to an already critical situation.

And secondly, you can try to play your part in fighting for a better, more sustainable world, where these spectacular beaches might have a shot at survival.