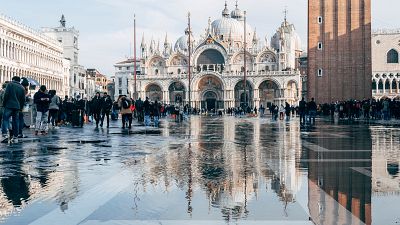 The island of Venice, crisscrossed by hundreds of winding canals, lives in symbiosis with the Adriatic sea. Water is vital for the city’s transport, industry and tourism.

But it has also become a threat as climate change and rising sea levels cause increasingly frequent and dangerous flooding. So what is the future of Venice and water?

A city dependent on water

The 150 canals that weave through Venice are the city’s streets and roads. Water buses, delivery boats, and emergency services rely on the waterways to move around the historic city and the outlying islands.

Water is just as indispensable for many of the city’s industries too. Historically, Venice was a major port for goods moving between Europe and Asia.

One of the biggest modern-day water-based industries is fishing. Fishermen head out daily into the lagoon and beyond and bring their catch — including species unique to the lagoon such as soft-shell crabs — to the renowned Rialto Fish Market.

The port of Venice is vital to the economy of the city too. It is the eighth-busiest commercial port in Italy and a major hub for cruise liners.

The canals and the surrounding lagoon are also a fundamental part of the cultural and touristic attraction of Venice. Visitors delight in the picturesque waterways with their quaint bridges as well as the wild, mesmerising expanse of the lagoon.

To experience life on the water, tourists can take rowing lessons in the canals on traditional boats or join excursions to see wildlife or try fishing in the waters surrounding the city.

A fragile lagoon in need of safeguarding

While water is fundamental to life in the city, it is also at the mercy of human actions. Heavy boat traffic and overly large vessels sailing through the narrow canals and the shallow lagoon have been damaging the sea bed and marine life.

Their impact came under the spotlight in 2020 when the canals became miraculously clear and full of sea life as coronavirus lockdowns halted traffic in the city.

The oversized cruise ships that, until recently, passed directly in front of St Mark’s Square have also caused significant problems. Their waves erode the foundation of the city while the deep channel in the lagoon they travel through must be regularly dredged, removing animal and plant life in the process.

Last year, authorities took the much-needed decision to ban large cruise ships from some areas of the lagoon.

Under the government plan, oversized liners can no longer pass through St Mark’s Basin, St Mark’s Canal or the Giudecca Canal but must instead be diverted to the nearby industrial port of Marghera.

This seemed like a victory for the activists protesting the presence of big ships in the lagoon. But they point out that as Marghera is still in the Venetian lagoon, the ecosystem remains at risk.

In November 2019, Venice experienced some of the worst flooding in the city’s history. The waters rose to 187 centimetres above sea level, the second-highest level ever recorded. It caused hundreds of millions of euros worth of damage.

Since then, a flood protection system consisting of mobile barriers at the entrances to the lagoon has been completed and put into action. It has been hailed as a miracle solution, but climate forecasts suggest it's only going to help in the short term.

A 2021 report from the Intergovernmental Panel on Climate Change predicted a possible sealevel rise of 63cm to101cm in the worst-case scenario.

To prevent vast areas of the city flooding, the barriers in the lagoon would need to be put into action so frequently it would have disastrous consequences for the ecosystem and the port industry.

The tidal exchanges between the lagoon and the sea also work to remove waste from the city. This means that Venice still does not have a comprehensive sewage system. With the mobile barriers closed too frequently, the lagoon would quickly become a fetid swamp.

A group of environmental scientists from the University of Padua is pushing for greater protection of the salt marshes in the lagoon. The increasingly frequent closure of the flood barriers is preventing silt and mud from entering to replenish these salt marshes. Without this, they will soon disappear.

The mudflats need protecting as they act as buffers to shield the city from high tides and are also a powerful carbon sink. Other, more outlandish ideas, include pumping water into the ground beneath the lagoon to raise the city by several centimetres and constructing a wall around the island.

While they seem like extreme solutions, it might not be long before they are what’s needed to keep Venice’s relationship with the water a good one.