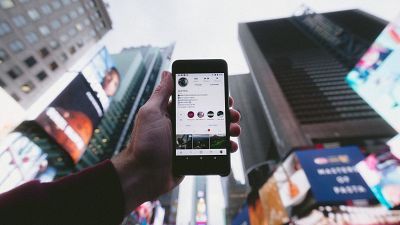 For better or worse, social media has dramatically changed the way we connect - both with each other as individuals, and with the world around us. When it comes to travel, social media can be a gateway to the globe.

The last decade is recognised as the one which saw the biggest rise in social media usage, output and influence. Celebrated and condemned by the press in fairly equal measure, the space has become especially prevalent in the midst of an isolating pandemic and the rise of social justice movements like Black Lives Matter.

The intrinsic link between social media and travel

Travel and tourism are no exception when it comes to the way social media shapes our lives. How many times have we planned our travels around a snap we saw on Instagram?

“Social media can be a powerful motivator and influence when it comes to making travel-related decisions - just think of the power of FOMO,” explains JoAnna Haugen, founder of Rooted.

The stats back-up JoAnna’s point. According to 2019 research, a staggering 86 percent of people - and 92 percent of the Gen Z generation - have researched a destination after being inspired by other users’ posts online.

Another pre-pandemic figure reported by Statista revealed that over a third of people use social media for travel inspiration and ideas, with 60 percent sharing their own content from holidays or travels.

In the same report, it was noted that one million travel-related hashtags are searched every week, a clear indicator of how the sector - along with #fitspo, #lifestyle and #foodporn - is a key player in the world online.

The fact is, social media is the most easily accessible source of information in this day and age. Half of people get their news from social media, which - aside from calling to question the legitimacy and reliability of information sharing - demonstrates just how influential the various platforms have become.

There are three key elements social media and travel have in common, which make them so fundamentally relevant to one another: both are about seeing and learning new things; both have an inevitable focus on the aesthetic; both expand the world beyond the realms of our immediate lives.

How social media has changed the shape of the travel industry

Where once we might have relied on guidebooks and information from select websites, social media has enabled us to see a world beyond the Eiffel Tower and Roman Coliseum.

There’s no doubt of the value in influencer culture - especially those like Eva zu Beck, who advocate travelling off the beaten track to experience cultures new and often overlooked.

Knowledge-sharing in this way has expanded the horizons of the 21st Century traveller. Not to mention the great advances we’ve seen in technology, which have progressed tourism much like how air travel changed the industry in the 1940s - 1960s. Even now, during a pandemic which has halted travel for many, virtual experiences are compensating for the travel-shaped gap left in many people’s lives.

James Asquith, founder and CEO of revolutionary travel platform Holiday Swap, believes that the presence of travel on social media is largely positive.

“It’s overwhelmingly a good thing,” he asserts, “it shows people more of the world, that might not be feasible in terms of time or money. You get to see people’s first hand experiences.”

But there’s no denying that social media can be misleading. And for the traveller who has invested time and money into the trip of a lifetime, as seen on Instagram, it has potentially damaging consequences.

New Zealand recently made headlines for encouraging travellers to ‘think outside the Instagram square’. The campaign focuses on calling people out for ‘travelling under the social influence’, and replicating photos they’ve seen on various influencer accounts.

“10 years ago, backpacking was cool. Because of social media, there’s this emphasis on luxury lifestyles and spending money so you can show it off on Instagram,” says James.

“There’s the argument that influencers are only really influencing influencers now. It’s usually sponsored content, it’s not an affordable option for the average traveller. And so it’s not reality.

For JoAnna, the ownership lies with both the content creator and the audience. She says, “What the viewers don’t get, in that split second moment of attention when you’re viewing a post in the feed, is the context. The creator’s perspective and intention, the historic and cultural context of the scene, who funded the opportunity.

"We as social media consumers," argues JoAnna, "need to be responsible for gaining that context." Though she does stipulate that, “Of course, the best travel influencers provide this in disclaimers. But we need to remember there might be gaping holes in the information, depending on the influencer.”

Jess Vincent, travel writer, expands on this point from her own experience.

“Social media becomes dangerous when it sets up false expectations. For example, you see a shot of the northern lights with bright greens and purples, or a shot of an empty Rainbow Mountain, and that’s what you expect to see when you travel there.”

Jess explains how when the reality isn’t quite the same as the Instagram, it’s the local guides and tour operators who deal with the fallout.

“The second issue is, of course, people flocking to locations just to get the perfect shot. But what does taking a picture in front of Machu Picchu teach you about Peru, its culture and its people?

“If everyone is just travelling to mimic the experiences we see online, we’ve lost the essence of what it means to travel and the ways it can enrich our lives.”