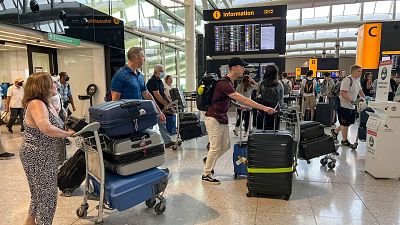 Horror delays at Heathrow are being partly caused by passengers taking too much make-up and feigning mobility issues, the airport’s boss has claimed.

To stem the chaos, the airport recently introduced a daily cap of 100,000 visitors and asked airlines to stop selling new tickets for August flights.

Speaking on ‘Leading Britain’s Conversation’ radio station, he claimed that airport security numbers matched pre-pandemic levels - but that passengers are “travelling with more than they usually would.”

"They have got more bags, and more liquids in their bags so that takes a little bit longer,” he said.

"A lot of people are put off from checking in all of their make-up for example because they are worried about whether their bag will make the journey with them.

“People tend not to think of makeup as being prohibited from travel, so there's a lot of education that we need to do with people."

Since it tends to be women carrying make-up, it is assumed his comments are directed at female travellers.

Heathrow’s flight cap - imposed in order to “protect holidays” - was slammed by airports like Emirates, which initially refused to comply.

On Monday, Ryanair’s CEO Michael O’Leary accused the airport of being unable to run “a p***-up in its own brewery.”

However, the airport has hit back, blaming airlines for failing to hire enough ground staff.

"Ground handlers are the backbone of what you think of as being the airport, but they are employed by the airlines,” Mr Holland Kaye said.

"They did a very good job through until the beginning of June [2022], but the demand was just getting too much for them so we had to take action."

On Monday, Heathrow announced that more than 750 unpaid volunteers would give away 10,000 hours and 2,200 shifts this summer to help passengers through the airport.

All this chaos impacts some people worse than others.

According to the Civil Aviation Authority, people with disabilities disproportionately bear the brunt of UK airport service failings.

“It is self-evident that those with less mobility will find it more difficult to access support at airports when things go wrong,” the CAA warned in June.

In the same month, a man fell to his death at Gatwick after being left waiting for a helper and disembarking a plane alone.

Asked about an incident where 20 wheelchair passengers were allegedly left waiting in a non-air conditioned part of the terminal, he claimed that some passengers were attempting to skip the queue by feigning mobility issues.

"Some of this is because people are using the wheelchair support to try to get fast-tracked through the airport, that is absolutely the wrong thing to be doing, we need to protect that for the people who most need help,” he said.

“If you go on TikTok you will see that is one of the travel hacks that people are recommending.”