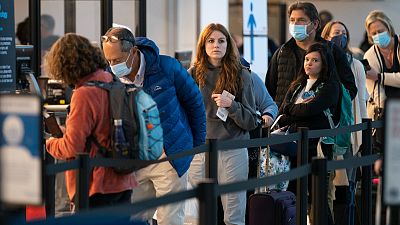 This week customers complained about having to wait hours in huge lines at security and passport control.

One flyer described “mammoth” queues after arriving at Heathrow from Bologna in Italy.

Another customer complained about “long serpentine queues” and waiting over an hour to clear immigration.

What is causing delays at Heathrow?

Staff shortages are being blamed for the lengthy delays and queues that have dogged London’s airports over the last weeks.

Both British Airways and easyJet have cancelled hundreds of flights in the last months due to a lack of staff.

“Earlier this morning for a short period of time Border Force experienced a large influx of passengers arriving into Terminal 3’s immigration hall. We worked closely with Border Force to minimise the queue times and the operation continued to run normally,” a Heathrow spokesperson said.

Are there still queues at Heathrow?

Heathrow has suggested that travellers may face more delays on Tuesday after tweeting, “queue times across the airport have risen.”

In response to a customer query, the airport wrote, “We do not have information of how much longer the queues may be at one given time.”

One flyer recently complained about an “absolutely chaotic” flight transfer at Terminal 5. “Masses of people standing waiting for things to open. No barriers. Could do better!” he wrote on social media.

Another customer wrote, “T5 this morning. South security at 7.30am - 25 mins start to finish, queue started at entrance to security area (but filling up behind us). Normal experience.”

Heathrow airport has advised customers to arrive at least 3 hours before their flights.

There are reports that travellers at Luton airport could also face long delays.

Chaos at Heathrow as a baggage system malfunction causes pile-up