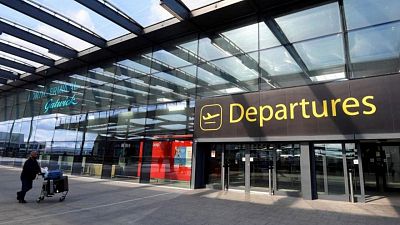 A man fell to his death at Gatwick yesterday after disembarking a plane without a helper.

The tragic accident happened just before 1pm on Wednesday, when the passenger fell down an escalator in the busy North terminal. After waiting in vain for special assistance he had left the plane and tried to make his way through the airport alone.

"A number of our cabin crew provided medical assistance to a passenger at Gatwick Airport whilst waiting for paramedics to arrive, however the passenger sadly later passed away,” a spokesperson said.

"Our thoughts are with their family and friends at this difficult time."

The airport has struggled with mammoth queues and delays in recent weeks.

However, a Gatwick Airport spokesperson insisted that shortages played no role in the incident.

"This is a sad and tragic incident and our thoughts remain with the family of the deceased,” the spokesperson said.

"A member of Wilson James staff was waiting when the aircraft arrived and was in the process of disembarking the three PRM passengers when the incident occurred.

"Staff shortages were not a factor in this incident as has been claimed. It is normal for one staff member to disembark three passengers who require assistance by taking them one at a time the short distance to the waiting buggy.”

The airport has launched a formal investigation into the tragic incident.

“It is self-evident that those with less mobility will find it more difficult to access support at airports when things go wrong, as compared to a passenger who might be able to seek out airport staff to assist with baggage delays, for example,” wrote Paul Smith, group director of consumers and markets.

The CAA called on airports to manage their assistance service function better.

Like many European airports, Gatwick has suffered from long queues and last-minute cancellations in recent weeks.