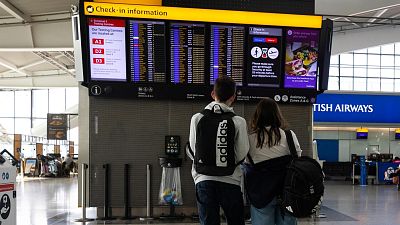 British Airways has cancelled another 10,300 flights between August and the end of October.

The airline says the move is intended to "protect holiday flights" after the airport chaos seen earlier this year.

More than 100,000 passengers visiting popular destinations including Faro in Portugal and Malaga in Spain are likely to be affected. BA says that most cancelled flights will be short haul on routes where there is more than one daily departure.

A spokesperson adds that a majority of passengers are likely to be unaffected and will manage to go abroad as planned.

The aviation industry continues to struggle with staff shortages as the number of passengers begins to bounce back. BA already cancelled 10 per cent of scheduled flights between April and October in an attempt to prevent flights from being axed on the day of departure.

Now a total of 13 per cent of BA flights will have to be cancelled as the airline says more schedule reductions are "regrettably" needed.

“We took pre-emptive action earlier this year to reduce our summer schedule to provide customers with as much notice as possible about any changes to their travel plans,” a spokesperson for BA said.

“As the entire aviation industry continues to face the most challenging period in its history, regrettably it has become necessary to make some further reduction.”

They added that the carrier, the UK’s largest, is in touch with its passengers to “apologise and offer to rebook them or issue a full refund.”

The UK Department of Transport recently set a deadline of 8 July for an amnesty on airport slots this summer season.

Intended to ease the airport chaos, it means that airlines can hand back authorised slots to take off and land that they aren’t sure they can operate. Airlines with scheduled flights later this summer they don’t think they can find staff for will be able to cancel without incurring fines or penalties.

After this most recent wave of cancellations, BA could announce that more flights will be axed this summer ahead of the Friday deadline.

Will strikes add to cancellations at Heathrow?

The threat of staff walkouts could also see flights cancelled at the last minute - but that looks to have been averted for the time being.

Thousands of BA check-in staff at Heathrow have suspended their plans to strike after a better pay offer, Unite the union announced on Thursday (7 July).

A great majority of staff had voted to take industrial action in a dispute over pay, claiming a 10 per cent wage cut during the height of the pandemic had not been reversed. They will now vote again on whether to accept the proposed offer, which Unite regional officer Russ Ball describes as “vastly improved”.

Nadine Houghton, national officer of the GMB union adds, “All our members - who are predominantly low-paid women - wanted was to be given back the pay cuts BA imposed on them during the pandemic, threatening them with fire and rehire if they said no.

“These are frontline workers facing anger from customers daily. The least they deserved was fair pay. The final decision on any next steps will be taken by them.”

Separately, 50 refueling workers say they are planning to stage a 72-hour walkout over wages starting 21 July, the Independent reports. It’s not yet clear how this action will affect BA’s operations during this time.

The 10 best European countries for an epic hiking holiday