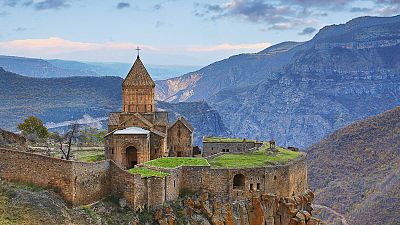 For many of us, Armenia is unlikely to leap to mind when planning a holiday abroad.

The former Soviet country, sitting between Turkey, Georgia and Azerbaijan, is a relatively new kid on the block when it comes to tourism.

Now, in our post-pandemic era of travel, it is positioning itself as an off the beaten track destination. Visitors are being encouraged to look beyond the capital Yerevan and to explore its rural and mountainous areas.

We have many hidden gems. We have amazing scenery, we have great pristine landscapes for hiking, nature and adventure tourism.

“We have many hidden gems. We have amazing scenery, we have great pristine landscapes for hiking, nature and adventure tourism.

“But we want to make sure we’ll be able to preserve those as well. If we have overtourism, that’s something that’s going to potentially jeopardise that.”

Head for the mountains and live like a local

Part of Armenia’s ‘hidden track’ approach is enticing visitors to stay in one of its many remote villages, sampling the hospitality of locals.

“When I was young, I went to big hotels, all inclusive, laid by the pool. But today I don’t like it. I like being in nature, where there’s something to see, to go walking a little bit,” says Bianka Blom, a German tourist on a road trip in Armenia with her family.

The Bloms have opted to stay at the Tegher Gastro Yard and Pottery Centre, around an hour’s drive from the capital Yerevan, in the village of Tegher in the Aragatsotn region.

It is part of a network of Gastro Yards, run by villagers, which aim to immerse visitors in local culture, heritage and gastronomy.

At Tegher, you can try your hand at pottery and creating stained glass, with the help of the friendly, and talented, Shushan family.

They also provide accommodation, including a hand-crafted treehouse, and a restaurant, nestled in gardens which are full of all sorts of creations and curiosities.

“It’s a special place, it’s very interesting inside. They make lots of little pieces that are very cute and nice,” says Bianka. “A hotel is not the same. Here is more authentic. We like it.”

But it’s also seen as key to unlocking the development of rural areas and communities in this small country of three million people.

“It’s an opportunity for the families and local people who are working or can work in the tourism sector. It’s an excellent opportunity to create new jobs,” says Zurab Pololikashvili, Secretary-General of the World Tourism Organisation (UNWTO), who recently visited Armenia.

“The government itself is investing a lot in infrastructure, mainly in roads, to create accessibility to the new destinations. There are lots of opportunities to develop the regional areas of the country.”

Armenia’s wine heritage can also be found beyond the bright lights of Yerevan. Natives believe that Noah planted a grape vine at the foot of Mount Ararat after the Flood, so it is something that is sacred to them.

Head to the village of Areni, in Vayots Dzor province, and you can visit the remains of what Armenians proudly say is the world’s oldest winery. Other countries in the region dispute this claim.

The Areni-1 winery was discovered in a cave complex in 2007 by Armenian and Irish archaeologists and is understood to date back to 4100 BC.

A wine press, fermentation and storage vessels, withered grape vines and seeds were among the many items found.

Grapes grown in Armenia nowadays are not only used for wine, but also to produce brandy. Twelve varieties, from the rural fields of Ararat, go into making it.

The historic factory, in the capital, produces 22 million bottles of brandy every year and is famous for its Noy brand.

“It’s very soft, it’s natural and during the blending, we only use spring water. Maybe the unique taste of this brandy is that.”

Take a tour and you can sample a selection of brandies. You will also hear about how former British prime minister Winston Churchill apparently fell in love with them.

Make a religious and spiritual connection

Going off the ‘hidden track’ in Armenia is about discovering more of the country’s rich religious and spiritual heritage too.

Armenia is one of the earliest Christian civilisations, with its first churches said to have been founded in the fourth century.

“We have thousands of churches and monasteries across Armenia. A lot of them are out in the regions as well, which encourages people to leave the capital city,” says Boghossian.

One of the country’s most important and unique religious sites is the fascinating Geghard Monastery.

One of the country’s most important and unique religious sites is the fascinating Geghard Monastery, which has UNESCO World Heritage status.

Located in the Upper Azat Valley, in Kotayk Province, it is partially surrounded by cliffs and partially carved out of the adjacent mountain. It contains several churches and tombs, dating back from the fourth to 13th century.

Getting to and around Armenia

There are direct flights to Armenia from a handful of European countries, including France, Germany and Poland. You can also travel via hubs like Doha.

Road infrastructure is still developing in Armenia, so you need to plan your journeys and routes carefully if you have a car. It is also quite challenging to find places off the beaten track.

Other options include organised tours and hiring a driver via your accommodation.