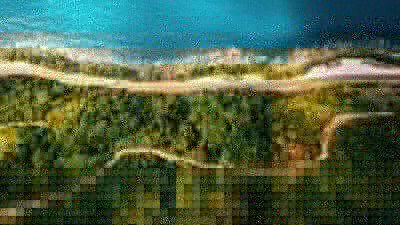 Dive into the diverse landscapes of Adjara and you’ll discover the historical Georgian region is teeming with ancient architectural gems, breathtaking nature and scintillating adventure – not to mention a wine scene that even UNESCO approves of.

Situated at the crossroads of Europe and Asia, the “Pearl of the Black Sea” is Georgia’s most up-and-coming tourism destination. And, as global travel ground to a halt during the COVID-19 pandemic, Adjara was excitedly planning its comeback.

“We’ve not stopped during the lockdowns,” says Tinatin Zoidze, Head of Visit Batumi. “Instead we used the time to develop ourselves with new hotels and services as well as new nature and ecotourism attractions, including 50 fresh nature [which will all be open by the end of the year] that wind through remarkable biodiversity.

“Now, we can say with confidence we have a thriving city with stunning architecture and hospitality combined with a breathtaking ecosystem that’s unlike any other in the world.”

Georgia was one of the first European countries to reopen its borders to international tourists. Currently, visitors only need to show a COVID-19 vaccination certificate or a negative PCR test to enter the country.

A haven for ecotourism, Adjara is home to four protected natural areas rich in flora and fauna and populated by more than one million raptors. More than 37 different species of the magnificent birds of prey can be spotted as they migrate through an area known as the Batumi bottleneck, with Adjara’s biggest city Batumi serving as the perfect base to witness the show.

Some of these forests are 20 million years old. It’s incredible for nature lovers.

"This is the only place in the world where the colchic forest - (a humid, deciduous rainforest) - and wetlands coexist, so it’s a really unique space,” says Zoidze. “Some of these forests are 20 million years old. It’s incredible for nature lovers.”

The parks, along with the Kobuleti Protected Areas, cover 13 per cent of the Adjarian region and have recently been provided with new and updated services including tourist shelters and guesthouses for those who want to stay a little longer.

Where can you experience the local culture in Adjara?

Monuments, monasteries, arch bridges and authentic mountain villages all come together in Adjara, giving tourists 8,000 years’ worth of human history to explore.

The narrow streets of Batumi ring with the echoes of polyphonic singing, while ancient Adjarian dances are routinely performed by locals and the occasional daring tourist.

In more recent years, world-class hotels, art exhibitions and sporting tournaments have been added to the mix, which have seen Adjara emerge as a pearl of modern Georgia, while still retaining its traditional charm.

One of the most intriguing historical sites is Gonio-Apsaros Fortress, located 12 kilometres from Batumi city on the banks of the Chorokhi River.

Built in the 1st Century, the fortress was a supporting citadel for the Romans and later the Byzantines and Ottomans. Traces of these ancient empires can be studied in the onsite museum.

Embrace your adventurous side in the Georgian mountains

With its forest, ocean and waterfalls, Adjara was made for thrill seekers with activities including diving, rafting, cycling and horse riding on offer all year round.

Further inland, skiers can head to one of the highest mountain ranges in Georgia to hit the slopes, plummeting from heights of up to 2,500 metres above sea level.

Visitors can bask on the sun-kissed shorelines one day, before carving through fresh snow the next.

The Goderdzi ski resort is a favourite for both sports enthusiasts and families, with four pistes totalling 8 kilometres of pristine snow. Located just 109 kilometres from Batumi, visitors can bask on the sun-kissed shorelines one day, before carving through fresh snow the next.

What should I eat and drink in Adjara?

Adjarian cuisine is a unique blend of European and Asian spices which has developed over centuries to form a distinctive gastronomy. For Zoidze, no visit to the region is complete without sampling Adjarian khachapuri, considered a local delicacy.

“Every region in Georgia has its own version but ours is superb,” she says. “It’s bread stuffed with cheese and baked in the oven. At the last minute, we add an egg yolk and top it off with a delicious pat of butter and there’s no better way to wash it down than with a glass of Georgian wine.”

The traditional wine-making technique in Georgia dates back 8,000 years and uses a traditional clay vessel called a qvevri. These unique tastes and flavours have encouraged wine enthusiasts to flock to the region, with UNESCO hailing it on its list of intangible cultural heritage.

Keda is the centre of Georgia’s vineyards with the tsolikauri and chkhaveri grapes the most popular. The first is used to make dry white wine, while the latter is a dark, pink skinned grape harvested later on in the season.

“We believe that Georgian wine is the best in the world.”