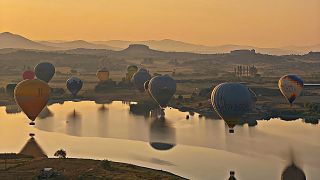 Cappadocia was put on the map by Instagram influencers who discovered colourful hot air balloons bobbing along the horizon amid fairy chimneys and ancient cave settlements. But they’re yet to lead the tourist throngs to Afyonkarahisar, where I found those familiar scenes, among other hidden gems, in a more authentic setting.

A 40-minute flight from Istanbul, Afyonkarahisar is the capital of the mountainous region of Afyon.

Afyonkarahisar has a few claims to fame: it’s the world’s largest exporter of pharmaceutical opium, the city in which Atatürk won the war of independence in 1923, and Turkey’s leading thermal spa destination. But despite all this, it’s still unheard of among European travellers.

Afyonkarahisar translates to ‘opium black fortress’ - denoting a 13th-century castle at the heart of the city. It’s worth the 800 step climb for the views, or save your legs and admire the fortress from the old town, among the iconic Ottoman houses which often crop up in Google searches for the city.

As I walked along the cobbled streets, notes of garlic and paprika from spicy sucuk (sausage) wafted my way and the call to prayer would resound intermittently from a nearby minaret. I found it hypnotic.

Throughout my stay, I couldn’t make it to the end of a single street without a smiley local inviting me in for Turkish tea. In Afyon, feeding your visitors means you’ve welcomed them properly. Three days later, my waistline was certainly a testimony to that.

Afyonkarahisar: a unique alternative to Cappadocia

A must-do when visiting Afyonkarahisar is the sunrise hot air balloon tour over the alluring Emre Lake. It’ll cost you around €45 (much lower than the €120 average in Cappadocia) for a forty-minute flight. There’s the option to eat breakfast on Emre’s banks afterwards to continue watching the day emerging from behind the fairy chimneys.

If you’re not too sleepy after an early start, you could go sailing onboard one of the lake’s solar-powered boats. It’s a 50-minute drive from the city, so make it worth your while before heading back and soaking in a spa for the afternoon.

What else is there to do in Afyonkarahisar?

From exploring troglodyte ruins to spotting wildlife in the national parks, there’s more to Afyonkarahisar than meets the eye.

I found magnificently preserved ancient cave dwellings in Ayazini village,dating back to the Phrygians in 1100 BC. I clambered among tombs guarded by Medusa, saw statues of the great Phrygian king Midas carved out of the rock, and marvelled at the tiny churches etched into the caverns.

After exploring the caves, I tucked into a hearty lunch at the newly opened Ayazhan Restaurant, which consisted of juicy meat kebab, fresh salad, and fresh flatbread baked in the wood-fired oven.

In stark contrast to the dusty cave cities and backstreets, there are several open green spaces and national parks, such as Emirdağ and Sandikli Nature Park, which offer sweeping vistas of pine-blanketed valleys, serene lakes, and even the chance to spot wild horses.

How do you get around Afyonkarahisar?

With some of the sites being quite spread apart, the easiest way to get around is by car. Navigating Afyonkarahisar isn’t easy for non-Turkish speakers so it’s best to hire a local driver or tour guide. Taxis are also easy to find.

There’s plenty within walking distance in Afyonkarahisar itself too, including Afyon Castle, the old town and bazaar, Culture and Art House, history museum, and the Grand Mosque.

Afyonkarahisar is a UNESCO City of Gastronomy, thanks to seven unique regional dishes. Naturally I had to try all seven, from Afyon’s cured sausage (sucuk) and kebabs to sweet cherries served swimming in their own sticky juice, and Afyon cream, which is produced with local buffalo milk.

First timers to the city should definitely try the sucuk and kebab (the meat is slow roasted in its own juices, making it really succulent) and for dessert, ekmek kadayifi (a sweet pastry soaked in syrup and served with a generous dollop of Afyon cream).

Turkey travel restrictions: Do I need a test to go to Turkey?

All travellers must complete a passenger locator form up to 72 hours before entering Turkey. If you’re fully vaccinated, this is all you need to do. Make sure you’ve got your Covid-19 vaccine pass on you as you may be asked to show it at the airport.

If you’re not fully vaccinated, you’ll either need a pre-departure test or proof of recovery from Covid-19 in the past six months.

Need to recharge? Book a trip to the world's happiest country

Want to make money while travelling? Apply for one of these jobs