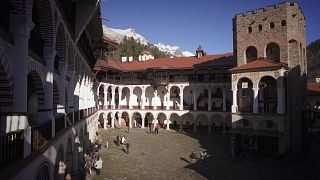 Founded in the 10th century, the Rila Monastery is Bulgaria’s largest and most renowned Eastern Orthodox complex. Built more than 1,100 metres above sea level its striking architecture is considered a masterpiece of the Bulgarian National Revival style, typical of the early 19th century, when the monastery was rebuilt after a fire.

"The way the walls with arches and colours are constructed and the main use of stone and wood is a unique combination between traditional construction and the influence mainly from Western Europe," explained Father Macariy Chakarov.

The Monastery was founded by St John of Rila. His dwelling and tomb became a holy site and were transformed into a monastic complex. Today it is home to seven monks, who are the guardians of the monastery’s impressive history and orthodox art, including magnificent frescoes from the Old and New Testament.

There’s a very special place in the monastery - its library

The complex has one of the biggest monastic libraries in the Balkans with over 60,000 volumes.

“The library of Rila Monastery has unique, rare and extremely precious books dating from the 10th century until today,” says Evgenia Ivanova, head of the Rila Monastery Library.

Despite being one of Bulgaria’s main tourist sites, the monastery has preserved its tranquil atmosphere built around the lives of the monks.