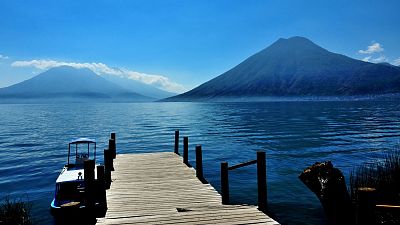 Lake Atitlan in Guatemala – a country whose popularity is soaring with solo travellers   -   Copyright  Canva
By Lorna Parkes  •  Updated: 01/07/2022

Central America and Mexico are rising up the ranks in popularity for travellers post-pandemic, say travel agents and tour operators.

New booking data from Hostelworld reveals that Central America has trumped Europe for hostel bookings for the first time in 2022.

Bookings to the region are up 40 per cent compared with 2019. But the surge in interest is highest among solo female travellers.

This may come as a surprise, given that several countries in Central America - which includes the countries Costa Rica, Nicaragua, Panama, Honduras, El Salvador, Guatemala and Belize - have high violent crime rates that have deterred some travellers in the past.

British solo female travellers are the biggest fans, with their bookings soaring 78 per cent.

Mexico (up 79 per cent), Costa Rica (up 60 per cent) and Guatemala (up 55 per cent) are in Hostelworld’s top 10 trending destinations for solo female travellers in 2022 for the first time.

Skyscanner has also registered a huge leap in Mexico flight bookings. Over the past two years, it says that Mexico City has risen up its global rankings by 148 places, from 197th to 49th place.

The Mexican Riviera tourist favourite Cancun is up 43 places from 124th to 80th.

What is the attraction of Central America for travellers?

The region’s growing popularity makes sense, given the increasing demand for nature-based travel since COVID.

In Hostelworld’s March 2022 Solo Travel survey, 74 per cent of solo travellers said they are looking for nature and natural world experiences.

And solo travel is on the rise as people reassess their lives in the wake of the pandemic.

Some 49 per cent of respondents said they are travelling solo because they want to prioritise life experiences over their career for a while.

Cost is also undoubtedly a factor when it comes to Central America’s popularity, at a time when the cost of living is affecting many people’s holiday spending power.

In Budget Your Trip’s Travel Cost Index, Guatemala is ranked as the least expensive country to travel to in Central America. It estimates that average daily travel costs for a solo traveller are $39.

Costa Rica is ranked as the second most expensive country, with an average daily travel cost of $69.

Compare this to the most popular travel destinations in Europe. The same index estimates that the daily travel cost in France is €186; in Spain it’s €119.

Where are the best hostels for solo travellers in Central America?

In Hostelworld’s annual HOSCAR awards this year, two out of the five overall winners were from this region.

Winner of ‘The People Person’ category was the Che Tulum Hostel and Bar.

It’s in one of Mexico’s most popular destinations, with a white-sand beach and the Tulum ruins on its doorstep.

Offering private rooms as well as shared dorms, the hostel is popular with solo travellers for its on-site bar, hot tub, social nights and hands-on staff. And a double ensuite room costs as little as £40 a night.

With a prime beachfront location in an island archipelago, the hostel is proof that immersive nature experiences can come cheap in Central America.

Popular for its beach clean-ups with guests, Palmar is powered by 100 per cent renewable energy. It only uses filtered rainwater on-site and contributes to local community projects.

And you can sleep there for as little as £17 a night in a dorm. There’s also a number of private options including bell tents, basic doubles with shared bathrooms and deluxe double ensuites rising up to £200 a night.

Why Costa Rica is a beacon for nature lovers

A fun fact about this Central American eco-haven: though it only covers 0.03 per cent of the earth's surface, Costa Rica contains nearly 6 per cent of the world's biodiversity.

Its landscape is characterised by volcano cones, tropical rainforests and sandy beaches along the Pacific and Caribbean coasts.

And Costa Rica is a sustainable tourism pioneer. Around 25 per cent of the country is protected by conservation areas.

In 2022, its Certification for Sustainable Tourism scheme celebrated its 25th year. To date, more than 400 tourism companies in Costa Rica have been certified.

It’s also focused on weaning itself off fossil fuels and runs almost completely on renewable energies.

Costa Rica’s popularity covers all corners of the tourism market. As well as becoming increasingly in demand with solo budget travellers, as Hostelworld’s booking data shows, it’s a favourite destination for luxury sustainable tourism too.

The tour operator Pura Aventura, which specialises in Latin America and Iberia, doubled the number of Costa Rica tours it runs for 2022. So far this year, bookings are up 10 per cent.

“Costa Rica continues to be one of our most popular destinations,” says Tom Power, Pura Aventura founder and CEO.

“Being awoken in your rainforest eco-cabin by the cry of howler monkeys, strolling along the beach at sunrise and going to look at sloths and toucans in a little-known coastal nature reserve will never lose its appeal.”