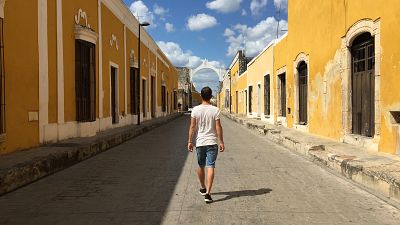 Walking through the beautiful streets of the Yellow City - or Izamal - one of the original Pueblos Mágicos.   -   Copyright  Ivan Cervantes
By Marthe de Ferrer  •  Updated: 01/07/2022

It doesn’t matter where you go in Mexico, chances are you won’t be far from one of the country’s ‘magical towns’ - or ‘Pueblos Mágicos’.

There are 132 Pueblos Mágicos dotted across Mexico - growing from just four initially in 2001 - with at least one in all of the 31 states.

Though there’s nothing supernatural about these towns, they have each been hand-selected for their unique charm and dedication to tradition.

For visitors wanting to experience the richness of Mexico, these magical towns are must-visits - although they come with a strict set of rules for residents.

How does somewhere become a Pueblo Mágico?

In order to become designated as a Pueblo Mágico, a town must meet certain criteria:

Despite lots of applications to the programme, only a handful of new Pueblos Mágicos are ever accepted. The last time any new towns were given the title was 2020, when 11 Pueblos Mágicos were created.

It’s possible to lose this status too. In order to retain the Pueblo Mágico name, towns have to maintain their cultural significance and preserve the traditions that earned their spot on the list.

Pueblos Mágicos can also be upgraded. It’s only happened once, but San Miguel de Allende in the state of Guanajuato became a UNESCO World Heritage site in 2008.

The programme nearly stopped a few years ago, due to a lack of support at a federal level - something that has almost happened a few times. However, the scheme was instead partially decentralised and now is supported at a state level instead.

Fortunately, I can tell you firsthand what these magical towns are like - or at least what one of them is like.

I visited Izamal last year, one of the first Pueblos Mágicos, as part of a wider trip across the state of Yucatán.

It’s one of the most famous towns in the scheme because of its unique colour palette. In fact, before I even knew a visit to the Yellow City (as Izamal is affectionately known) was on my itinerary for the trip, a colleague pointed me to an article he had previously written for Euronews Travel that highlighted the beauty of this town.

When I first learned of the Pueblos Mágicos scheme, I was concerned that these towns would feel like model villages or theme parks - almost trapped by their status, and unable to feel like an authentic place.

Izamal, however, feels very real. It’s absolutely stunning of course, but it’s not so polished in pursuit of perfection that it ever appears fake. Instead, it’s a gorgeous town with a strong sense of history and tradition, where normal people live and work.

The city dates back to around 750 BCE and has been continuously occupied since that point. Izamal has seen civilisations rise and fall, pyramids built, colonial forces arrive - and all this extraordinary history is reflected throughout the town.

Izamal’s other nickname is the City of Hills because it is flanked by the ruins of ancient pyramids. It’s also home to a 16th-century monastery (which is, of course, yellow too), with the second-largest open atrium in the world after the Vatican.

After exploring the streets of Izamal by quadbike (which I highly recommend as a mode of transport in a town like this), I was able to walk through the monastery as the sun set. The light throughout the Yellow City at this time was extraordinary - and it’s well worth timing a trip to Izamal to see this.

Are Pueblos Mágicos a good thing?

Though my experience with Izamal was resoundingly positive, at the end of the day the Pueblos Mágicos programme is designed to attract tourists - not necessarily to improve the lives of residents. Of course, boosting tourism is intended to help create more jobs in the area, but this doesn’t always lead to material improvements for locals.

Tourism is a vital part of Mexico’s economy, with over 41 million tourists each year making it the 7th most-visited country in the world (pre-pandemic). The sector represents almost 10 per cent of Mexico’s GDP, so tourism schemes like Pueblos Mágicos are a vital part of distributing that investment throughout the country. Instead of travellers only focusing on major cities and resort areas, the programme encourages people to visit smaller towns and experience the diversity within Mexico.

The Pueblos Mágicos scheme has been credited with preserving many historical sites, providing much-needed funding for the restoration of “historic centres, monuments and churches”, according to Raul Valdez Muñoz, a researcher who has analysed the impact of the programme.

But Valdez Muñoz also found that the economies of smaller towns in the programme haven’t benefited much, instead the larger nearby cities have financially gained as tourists prefer to stay in the bigger towns and do short trips into the Pueblos Mágicos.

It’s also been found that some towns have used funds on “projects that focus on appealing to tourists by ‘earlying up’ structures - modifying them to make them appear older or making them more grandiose than they were originally,” says community planner Gibrán Lule-Hurtado.

Lule-Hurtado stresses that though the Pueblos Mágicos programme undoubtedly has benefits, there is an ongoing risk that towns may opt to focus on inauthenticity that is more appealing to tourists, over actually preserving real-life traditions.

“This pattern of change may be observed in the appearance of buildings designed to draw in tourists, but without much consideration for the town’s cultural past,” says Professor Anna Winiarczyk-Raźniak.

“For example, some buildings are made to look colonial - even though they may have nothing to do with Mexico’s colonial past.”

Winiarczyk-Raźniak also concludes in her research that is no evidence to suggest the lives of residents in Pueblos Mágicos have substantially improved - but she stresses that with a little more oversight, it’s quite possible people could start to see more concrete benefits.

Lule-Hurtado agrees. He notes that many other countries have looked at launching similar schemes and that with the right management they could prove to be very beneficial at a local and national level.

Overall, no experts seem to be saying that Pueblos Mágicos should be avoided - with many noting how well the programme has worked at redistributing tourists through Mexico, facilitating travel to regions many international visitors would never normally go to.

So if you’re looking for a way to explore Mexico a little differently, it’s definitely worth seeing if you can add some magic to your itinerary.