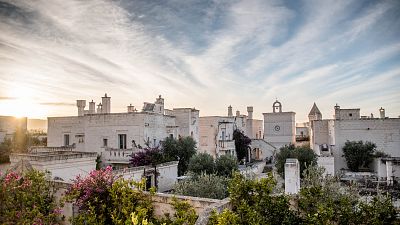 After more than two years living through a pandemic, we're all more aware than ever of our own vulnerability. As much as people like to travel in order to escape the stresses and strain of normal life, some are starting to travel in the hope of extending their lives too.

As a result, some travellers are looking to journey to the Blue Zones - regions where people tend to live far longer than average.

These zones are found in:

These regions have been identified by experts as destinations where people live the longest. In the UK, the average life expectancy for a man is 79.9 and for a woman is 83.6 – however, in these Blue Zones, people regularly live to 90, if not 100.

What’s the secret of a long and healthy life?

After studying the lifestyles of people in Blue Zones, numerous parallels were found in the way that they approached eating, exercising, socialising and spending their time.

Instead of going to the gym, they built up fitness through every-day natural movement from activities such as gardening; they eat smaller portions of home-grown plant-based food and stop before they are full; they are part of a close-knit, supportive community and take part in stress-relieving rituals such as prayer and siesta.

Many also drink moderate amounts of wine with friends and at meal times.

In leading research into the Blue Zones, American explorer, National Geographic fellow and author of The Blue Zones book, Dan Buettner, noticed that people living in these places didn’t necessarily become centenarians because they had better genes – it was because they naturally had better lifestyles and diets.

They had close family connections and traditions, and a sense of purpose (in Japan they call this 'ikigai'). "If you want to live longer and be healthier, don't try to change your behaviours, because that never lasts for the long run," explains Buettner, "think about changing your environment.”

The rise of longevity tourism

Not everyone will be able to (or want to) live in Blue Zones, but it's pivotal visit these regions to learn from them. In the future, Blue Zones will become hotbeds for 'longevity tourism,' as we seek out clues and tips to live longer lives.

On the sub-tropical Japanese island of Okinawa, where there are 35 centenarians for every 100,000 inhabitants – five times more than the rest of Japan, which already has a high average life expectancy (87.4 years) – the Halekulani hotel has already started offering 'Secrets of Longevity' retreats. These trips include buying native ingredients in the local market, and visiting the world’s first deep-sea-water hot spa facility.

Down on the Nicoya Peninsula in Costa Rica’s Blue Zone, visitors can book into a yoga retreat, eat freshly caught fish, go surfing and ride horses along the beach.

Alternatively, Blue Zone explorers can head to the little-known island of Ikaria in Greece, where they can dine in relaxed tavernas and swim in the turquoise sea.

It might be a little more difficult to immerse yourself in California’s Blue Zone of Loma Linda, which is home to a community of Seventh-day Adventists, but the state has many amazing wellness retreats to try – from Canyon Ranch Woodside to the Ranch Malibu – not to mention delicious food and beautiful natural wilderness.

As we move through the difficulties faced during this pandemic, could this be the travel trend we all need?

Jenny Southan is the editor and founder of travel trend forecasting agency 'Globetrender'.

Where is this magical 'treehouse' and why is it so popular on Airbnb?

Why sleeping outdoors under the stars is good for mind, body and soul