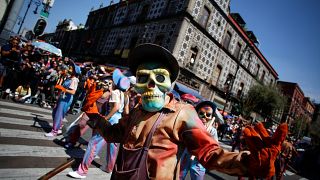 Mexico City threw its biggest Día de los Muertos parade ever on Sunday as COVID-19 numbers begin to drop in the country.

Thousands of locals and tourists lined the Paseo de la Reforma - which runs through the heart of the city - to attend the parade. The event was cancelled last year, due to the devastating effects of the COVID-19 pandemic.

A majority of Mexico City adults are now fully vaccinated and local officials embraced the national holiday as the perfect moment to reopen the city.

Running from 31 October to 2 November, Día de los Muertos is a national holiday that involves family and friends gathering to pay respects to loved ones who have died.

Although the holiday can be traced back to the Medieval European celebration of All Saints' Day, this colourful annual parade is actually a new tradition for which we can thank James Bond.

Yes, your read that correctly. The first Day of Dead parade actually took place in 2016, the year after the release of the James Bond film. Spectre, opened with an elaborate scene showcasing a fictional parade through the historic centre of Mexico City.

Due to the interest in the film and a government desire to promote Mexican culture, the following year, local authorities organised an actual Día de Muertos parade which was attended by 250,000 people.

Mexico has endured one of the highest death tolls worldwide from the COVID-19 pandemic, and last year authorities urged the public to stay at home for the holiday. Ordering the closure of cemeteries where festivities are traditionally held.

Día de los Muertos, which in 2003 was added to the UNESCO Intangible Cultural Heritage list, centres around the belief that the living and the dead can commune during this brief period, and is a time of colourful celebration.