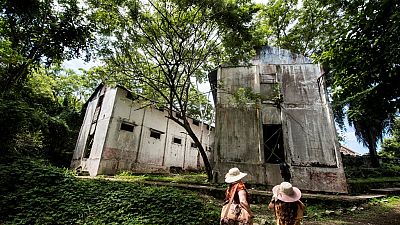 In Costa Rica, the dismal prison island of San Lucas has been transformed into a tourist paradise with a natural park and wild beaches.

Not far from the coast of the Gulf of Nicoya, on the Pacific coast, the island of San Lucas was until now notorious for its prison which operated from 1873 until 1991.

Abandoned, the prison was classified as a national heritage in 1995, and the island declared a nature reserve in 2001.

This year, San Lucas has found a new destiny by opening to tourists.

The old prison island has been rehabilitated with paths allowing hikers to discover its beautiful flora and fauna, while the old penitentiary has been fitted out to welcome visitors.

Costa Rican First Lady, Claudia Dobles was at the forefront of the project, with a total budget of 2 million euros.

"San Lucas is a spectacular, cultural, historical, architectural place (with) beaches, biodiversity ... It is the best-kept treasure in the Pacific," says Rican.

At the start of its 117-years as a prison facility, San Lucas was used to jail politicians deemed "undesirable" by the then military government of President Tomas Guardia (1870-1876 and 1877-1882).

The establishment then became a high-security prison where the most violent criminals in the country were held.

One of its famous prisoners, the Costa Rican writer José Leon Sanchez, was in held in the prison for ten years where he wrote the autobiographical novel, "The Island of Lonely Men", published in 1963.

Prisoners often left graffiti on the walls of cells. One inmate demonstrated his passion for football by drawing a player wearing the Brazilian yellow jersey.

Because of their similar histories, the Costa Rican government plans to strike a twinning deal with Alcatraz Prison Island, whose ominous silhouette stands out against San Francisco Bay, California.

At the bend of the paths that run through the 500 hectares of San Lucas, you can see the remains of the first prison quarters in the middle of the forest, thats the home to many animals.

"Here we find great biodiversity", says Giovany Mora, a forest ranger who has worked on the island for 14 years.

For now, tourism on the old island-prison is limited to weekends and for only three rotations per day.

Despite these restrictions, 920 people visited the island in August, practically all Costa Ricans.

Denmark votes to go ahead with controversial prison island