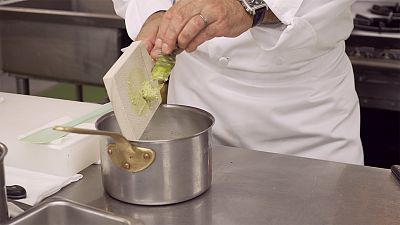 Taste is lucky to have Michelin-starred chef Thierry Voisin, who cooks at a restaurant in Tokyo, and knows this prized plant, to tell us more about it.

"Wasabi is an important ingredient in Japanese cuisine. It brings depth of flavour, gentleness and great strength elegantly combined," says the Chef at "Les Saisons" restaurant in the Imperial Hotel in the Japanese capital.

Greenhouse-grown, wasabi needs spring water and can be picked throughout the year.

In its purest form, the base of the plant is used, just above the root, and grated fresh. The best taste comes from the best conditions says one grower, Keiichi Mochizuki.

"The water from the spring we use is at constant temperature, around 13 or 14 degrees all year long. That's ideal for wasabi, and that's why it's so good," he says.

Thierry Voisin is clear about the difference in quality between what most of us know as wasabi, and the real thing.

"Definitely. Wasabi tubes are convenient, but there's nothing better than fresh, natural ingredients," he insists, promising to cook us one of his wasabi recipes later.

"Before Chef Voisin takes us to his kitchen I'm visiting Mr Mochizuki's factory, where some of his output is vacuum-packed for export to Europe and Asia. A kilo of fresh wasabi is worth 400 euros, because it's so rare," reports Euronews' Sophie Claudet.

From the farm to Tokyo, where Chef Voisin is ready to present his wasabi dish.

"So, we're going to cook mackerel in a white wine jelly, and accentuate the mackerel with a wasabi sorbet," begins Voisin.

"For the sorbet we need fresh milk, cream, inverted sugar...normal will do, and boil them. Grate the wasabi, and then add it to the mixture.

Add some wasabi leaves, for the vegetable matter and also the sublime colour, and then pour the mixture into a freezer bowl, and freeze.

Serve the dish up, with the sorbet on a wasabi leaf. I'll leave the tasting to you," says Voisin to our lucky reporter.

"Take a large piece of fish with the vegetables, a little jam, and the sorbet that will line the palate," instructs Voisin. Our reporter digs in with relish.

You can find this recipe on euronews.com. See you soon!